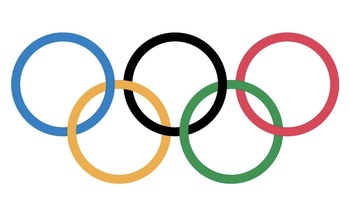 The famous Olympic Rings, designed in 1913 by Pierre de Coubertin (with the current version applied since 2011).
"Citius, Altius, Fortius – Communiter"
— Motto as of 2021 ("Faster, Higher, Stronger – Together.")
Advertisement:

In its purest form, the Olympic Games are a time when the world stops fighting, gathers together, and proceeds to watch as every country tries to show up every other country by beating them at sports.

Essentially, it is a chance for (mostly) friendly competition between nations for the greater glory of one's homeland, all under the light of a sacred fire lit with the rays of the sun and brought all the way from Olympia in Greece, where an ancient version of the Games were held from 776 BC to AD 393. However, the Olympics can also get pretty political. Just ask the residents of Moscow and Los Angeles when they took turns hosting at the height of the Cold War.

Originally from Ancient Greece, the Games were revived as a concept in 1896.

Held from 776 BC to AD 393 in (fittingly enough) Olympia, Greece. As with the modern Olympic Games, they were held every four years or Olympiad; Greek historians used the Olympiad to keep track of the years, because it was the one event that all of Greece could be counted on to attend and could therefore be used to cross-reference dates in the innumerable calendars the city-states used. (Each state had its own calendar, and some had two; Athens, for instance, had a twelve-month lunisolar calendar for religious and agricultural purposes, and a ten-month solar calendar for managing state business.)

The Games were only open to free men who spoke Greek (although women could enter horses in the equestrian events, and were later given the Heraean Games

, though not much is known about them and they appear to have been a far less prestigious affair). Winners were given wreaths made of olive branches and became heroes — some of them even gods, literally — to their hometowns, which often brought with it a considerable sum of money (among other perks, laureates in Athens, for example, were entitled to free meals for life at the Prytaneum). Athletes competed in the nude; in fact, our word "gymnasium" comes from the Greek word "gymnos," meaning "naked".

Back in the day, Olympics were very big deals indeed; during the Games period and while the athletes were traveling to the Games and back, all wars were put on hold, armies were forbidden to enter Olympia, and the use of the death penalty was suspended, in contrast to the modern world, where the Olympics gets suspended in favour of warfare.

The Games became increasingly commercialized over the centuries as Greece lost power and prestige in the world. They were no longer considered a religious festival but a secular event. Non-Greeks were allowed to enter, and winners sought not just prestige and laurels but money. Invaders tore down the temples and shrines, while people like Nero "competed" and of course won. The Games were ultimately banned by Emperor Theodosius I, who established Christianity as the state religion of The Roman Empire and viewed the Olympics as a pagan festival.

Established by a group led by French aristocrat Pierre de Coubertin, the first modern Olympic Games were held in Athens in 1896. Since then they have been held every four years (coincidentally on every leap year and every US presidential election year too) for the most part; this tradition has only been broken on four occasions, with the 1916 games being cancelled due to World War I, the 1940 and 1944 games being cancelled due to World War II, and the 2020 Tokyo Olympics being postponed to the following summer due to the COVID-19 Pandemic. There have been a number of near-misses too (most infamously the 1972 games in Munich, which were nearly cancelled midway through following a high-profile terrorist attack), but so far the four aforementioned games are the only ones to not fulfill the traditional schedule.

Originally a strictly amateur affair in the truest sense of the word, some early winners literally were just in town and decided to have a go. The rule against professionalism was extremely serious. Jim Thorpe (Sac & Fox), who won two medals at the 1912 Games hosted by Stockholm, Sweden, was actually stripped of them when it emerged he'd earlier played baseball semi-professionally. He got them back in 1983, thirty years after his death. However, the rule against professional athletes competing in what were considered amateur events had been lifted in part due to how the Soviet Union and other Eastern Bloc areas implemented the idea of a "full-time amateur athlete" where they were considered either students, soldiers, or workers in another profession, but were actually paid by the state to play in well-developed leagues and modern facilities to train year-round. The result of that loophole led to events like basketball allowing for professionals to play in the Olympics by the end of the 20th century. One famous example of professional players being able to play in the Olympics and do incredibly well was the 1992 U.S. Dream Team, a men's basketball team filled with eventual Hall of Fame players from the NBA (alongside a player from the NCAA and a recently retired NBA player having one last hurrah for himself), that curb stomped the competition of the entire event that year.

Events for the games have varied over the years, with some early events (like lacrosse and tug of war) not lasting and some more recent additions, like badminton in 1992, taekwondo in 2000 and rugby sevens from 2016. Artistic events were also previously featured as a part of the Olympics in the early days from 1912 to 1948, with architecture, literature, music, paining, and sculpture all being a part of the Olympiad at one point (with the focus of sport in mind) due to the original intentions for the Olympics by Pierre de Coubertin himself. However, all artistic endeavors for the event stopped being considered events for the Olympics by 1954 due to a ruling saying all Olympic athletes had to be amateurs, while artists were considered professionals in their respective fields. Cultural Olympiads are considered official replacements for artistic fields with the Olympics since 1956, with more information on it found in The Other Wiki here.

One unique event for the games is the "modern pentathlon", consisting of show jumping, 200-meter freestyle swimming, pistol shooting, épée fencing, and 3-kilometer cross-country running, purportedly based on the experiences of a nineteenth-century cavalryman behind enemy lines. As a side note, from 1912 to 1952 cavalry officers were allowed to compete in the pentathlon, while cavalry soldiers were not; the reasoning was that soldiers trained in riding and weaponry for a living and hence were "professionals", while officers were independently wealthy and were considered "amateurs".

The host city for any given Summer Olympics is chosen about seven years in advance by the International Olympic Committee: cities submit detailed bids, which are voted on in a fairly complex process. After the first Olympiad, a large number of organizers and endorsers advocated for having the games hosted in Athens every year to uphold ancient tradition (even if it wasn't in Olympia), but this was vetoed in favor of making the games a globally-travelling affair; the games would not return to Greece until 108 years later in 2004, where they were once again held in Athens. Hosting the Olympics is a very expensive thing, although (ideally) it does give you a nice stadium or three and some vastly improved city infrastructure when you're done. In many cases, the games can act as a symbol of national strength, for better or for worse, and indeed the Olympics have been utilized for this purpose by a number of regimes, from Nazi Germany's propaganda piece in 1936 to South Korea's freedom from dictatorship in 1988, to the world in the wake of inclusion, diversity and the aftermath of an ongoing pandemic in 2021 (the 2020 games having been delayed by a year).

The Summer Games
All Games are numbered as the "Games of the [Roman numeral] Olympiad", an Olympiad being a four-year cycle.

The Winter Olympic Games consist of multiple winter sport events — officially defined as sports practiced on snow or ice — and are held every four years, also excepting 1940 and 1944. The first Winter Games were held in 1924. As with the Summer Games, various sports have been added and/or removed over the years, but six events — figure skating, speed skating, ice hockey, cross-country skiing, ski jumping, and Nordic combined — have been featured in every Winter Olympics since 1924. Today's games also feature snowboarding and luge, just to name a couple.

The Winter Games
Unlike the Summer Olympics, which count the Olympiad whether the games occurred in them or not, the Roman numerals of the Winter Olympics count only the games.

Instituted in 2010 for athletes aged between 14 and 18 years old; besides featuring the usual Olympic sports (with a few variations),note For example, basketball is 3x3 instead of full court; field hockey is 5-a-side (officially known as Hockey5s); futsal is played in place of regular association football; handball is played on the beach; and the only variation of volleyball is beach volleyball. these Games are unique for the inclusion of mixed-nation as well as educational events. Some Youth Olympians, such as Welsh taekwondo star Jade Jones, have gone on to win gold at the major Olympics after winning at the Youth Games. It's even happened in reverse; at the 2012 London Games, Lithuanian swimmer Rūta Meilutytė won gold in the women's 100-meter breaststroke in an upset. She was only 15. Two years later, at the second Summer Youth Games in Nanjing, China, Meilutytė won both the girls 50- and 100-meter breaststroke golds, having firmly established herself in the breaststroke discipline.
The Summer Youth Olympic Games

Continental and Regional Games indirectly under the IOC

Like the Olympics, but for athletes with disabilities. Held after the Olympics, in the same venues. It is not, however, organized by the IOC but by the International Paralympic committee

, founded 1989, and has its own logo - three arcs rather than five rings. The name means that they run parallel to the Olympic Games, not that it's for the paralysed. Do not confuse them with the Special Olympics, which is a competition for mentally handicapped athletes that's styled after the Olympics but unaffiliated. Also does not include either parachuting or paragliding which are events in the World Games, which tries to be like the Olympics for non-Olympic sports.* Plus non-Olympic disciplines within Olympic sports. Most of the sports are about the same as the Olympics but there are a few that are exclusive to the Paralympics, such as boccia, wheelchair rugby, and goalball. Now has its own page!

Presidents of the International Olympic Committee

The Olympics in Fiction