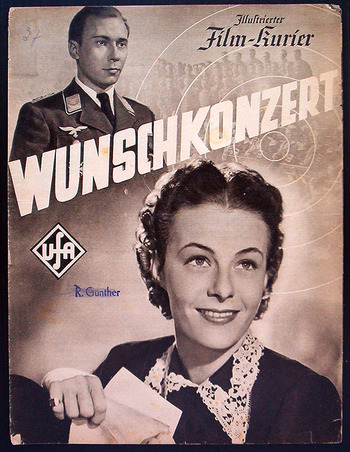 Inge and Herbert meet for the first time at the opening ceremony for the 1936 Olympic Games in Berlin. After a whirlwind three-day romance they are already making plans to marry. However, Herbert is a Luftwaffe pilot, and with no notice he is sent off to be part of the Condor Legion of German "volunteers" fighting in the Spanish Civil War. And to keep the mission a secret, Herbert and the other German pilots are forbidden to tell anyone where they are going or to write any letters for six months.

As a result, Inge and Herbert lose touch. Three years pass, and World War II begins. Neither Inge or Herbert forget about the other, though, and when Inge hears Herbert's song dedication over the "Wunschkonzert" radio program, she seeks him out again.

All of this is basically an excuse for Nazi wartime propaganda themes that emphasize the dutiful loyalty of German women at home, while heroic German men serve in the Wehrmacht.