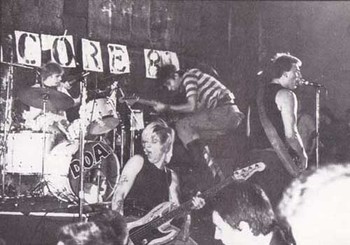 D.O.A. is a legendary Canadian hardcore punk band formed in Vancouver in 1978 by singer and guitarist Joe Keithley, also known by the charming stage name “Joey Shithead”, out of the ashes of his previous outfit The Skulls. The original lineup also consisted of bassist Randy “Rampage” Archibald and drummer Chuck “Biscuits” Montgomery (who would later go on to play for Black Flag, Circle Jerks, Social Distortion and Danzig).

Inspired by earlier punk bands like The Ramones and Sex Pistols, populist folk singers like Pete Seeger and Woody Guthrie, classic rock bands like The Who and Led Zeppelin, and a smattering of Reggae, D.O.A. combined political outspokenness, a gritty working-class aesthetic, a frank sense of humour, a relentless touring schedule and catchy, thrashy riffs to become the face of Vancouver's then-fledgling punk rock scene (alongside bands like The Dishrags, The Subhumans, The Young Canadians and The Pointed Sticks) and one of Canada’s most legendary punk bands. Along with groups like Black Flag, Dead Kennedys, Minor Threat, Hüsker Dü and MDC, they were part of the first wave of bands that could be described as Hardcore Punk. Their lyrical content and association with various radical left-wing political causes also makes them, along with The DKs and Crass, among the first anarcho-punk bands.

The band is often credited with naming the hardcore genre: Joey Shithead offhandedly described D.O.A. and bands like it as “hardcore” in a 1979 fanzine interview, and iconic Nevada band 7 Seconds soon consciously adopted the word as a descriptor of their sound. D.O.A.’s 1981 album Hardcore ‘81 and the extensive North American tour undertaken to promote it likely helped spread the term around. In 2019, the album’s iconic status was cemented when it won the Polaris Heritage Music Prize (beating out classic Canadian albums by The Band, Joni Mitchell, and Sarah McLachlan in an online poll).

Several lineup changes later, the band first called it quits in 1990 after releasing their 5th and 6th studio albums Murder and Last Scream of the Missing Neighbors, the latter a collaboration with ex-Dead Kennedys frontman Jello Biafra and their best selling-record to date. Joe then pursued an acting career and formed a short-lived band called Instinct.

By 1992 though, D.O.A. were back at it as a Power Trio with new drummer Ken Jensen and a new studio album, 13 Flavours of Doom, produced by Nomeansno's John Wright. Tragedy struck in 1995 when Jensen died in a house fire, and subsequently lineup changes became no less frequent than before; the band added second guitarist Ford Pier and drummer Brian O'Brien in 1995, but longtime bassist and co-lead singer Brian "Wimpy Roy" Goble left soon after.

Joe became a published author in 2003, releasing the memoir I, Shithead: A Life In Punk through local Vancouver publishing house Arsenal Pulp Press. He followed it up in 2011 with Talk - Action = 0, which shared its title with D.O.A.'s most recent album and was more of a "coffee table" book, with hundreds of rare photos, posters, lyric sheets and other archival materials from the band's career accompanied by anecdotes from Joe.

The band announced their retirement a second time in 2013 in anticipation of Joe Shithead running for political office (under his real name, Joe Keithley) in their home province of British Columbia. Joe’s bid was ultimately unsuccessful, and by 2014 D.O.A. was back at it again with a new lineup and a new album, Hard Rain Falling. Joe was eventually elected to office in 2018 as a city councilor in his hometown of Burnaby, British Columbia, and now splits his time between serving on council and recording and touring with D.O.A.