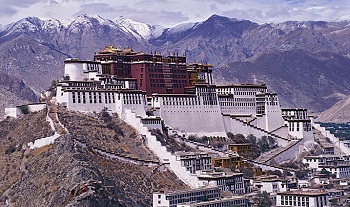 China owns this now. Damn commies!
Mao: "Our mistake was that we did not disarm the Dalai Lama right away. But at that time we had no contact with the popular masses of Tibet."
Khruschev: "You have no contact even now with the population of Tibet."
Mao: "We have a different understanding of this issue."
Khruschev: "Of course."
— 2/10/1959 Discussion between N.S. Khrushchev and Mao Zedong

A former country in East Asia, the stereotypical setting of The Shangri-La and the subject of a popular political cause.

For centuries, Tibet was a Buddhist theocracy ruled by a duo known as the Dalai Lama and the Panchen Erdeni (there were emperors prior), both the Tibetans believed to be the Reincarnation of great Lamas from the early 1700s. From the era of Kublai Khan until the fall of the Qing Dynasty, Tibet was under some level of control by Imperial China and the Mongols. Disagreements over how much control tend to center around what political axe the speaker wants to grind. In any case, the chaos of the Xinhai Revolution allowed Tibet to slip out of Chinese control and achieve de facto independence in 1912. During the period between 1911-1949, Tibet is largely closed to outsiders, with the exception of the British based in India. It is during this period in which a romanticized depiction of Tibet, as a land of Buddhist mysticism, became widespread in works of popular culture, such as "Lost Horizon".

In 1950, Tenzin Gyatso became the 14th and current (and possibly last) Dalai Lama. That same year, with the Soviets handing Xinjiang over to Red China and the People's Liberation Army crushing the last Guomindang holdouts in Qinghai and Inner Mongolia, Mao Zedong decided Tibet needed to be "liberated" from "imperialist forces". Even though it was essentially independent, Tibet had the potential to become a security problem if it fell under increased Indian or Soviet influence and the PRC had no desire to be forced to play a diplomatic game with them over a state that could be annexed fairly easily. The PRC then proceeded to use Maoist Marxist-Leninism to "save Tibet from theocratic feudalism". For most of the 1950s, the Dalai Lama cooperated with China's new communist rulers, but he fled Tibet during a 1959 rebellion against Chinese rule. He arrived in India, where he established a Government in Exile and is based there to this day. The Dalai Lama has since become an international celebrity and met with various world leaders. For the first twenty years of his exile, the Dalai Lama argued in favor of Tibetan independence, but he has since moderated his position to favoring greater Tibetan autonomy within China. 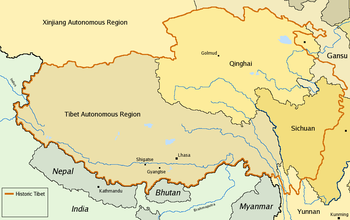 There is considerable debate whether there will be another Dalai Lama after the current one dies. He claims that he will not reincarnate in Tibet unless it is free. The Chinese government claims that it has the authority to select the next Dalai Lama since the Republic of China (Taiwan) does not offer to oversee the process and the reincarnation of the Panchen Erdeni is stable. That the Chinese government claims to be able to control whether the Dalai Lama will reincarnate will come off as Insane Troll Logic to anyone with even a passing familiarity with Tibetan Buddhism. Notably the current kid incarnation of Panchen Erdeni was taken in 1995 by the Chinese government and replaced. Chinese officials have only disclosed regarding the whereabouts of the kid that "The reincarnated child Panchen Lama you mentioned is being educated, living a normal life, growing up healthily and does not wish to be disturbed." The Dalai Lama has separately confirmed the well-being of the Panchen Lama through his own sources. To makes matters more complicated, the Chinese government would rather use the Qing Empire-era method of picking new Dalai and Panchen Lama, the so-called Golden Urn, which boils down the process of finding reincarnations via... drawing lot from an urn. Historically, this was used with grudging acceptance of the Tibetan monks, who simply draw "the right" lot from the urn after first identifying the proper child, but nowdays it's Pekin doing the "Dalai Lama lottery".

It's also worth noting that Tibet has a complicated history with the Kuomintang government, which ruled mainland China from 1911 until 1949, and still exist as an electoral party in Taiwan today. The two sides fought a border war between 1930-1932, in which the Ma clique, a group of Hui Muslim warlords allied with the KMT, drove the 13th Dalai Lama out the neighboring Qinghai province. Following their defeat in the Chinese Civil War, the KMT retreated to Taiwan, but nevertheless, they occupied China's seat in the United Nations until 1971. Up until the 2000s, the KMT government claimed Tibet, as well as Mongolia and the rest of Communist China, as part of the Republic of China.

On a related note, while popular media often portrays the Tibetans as peaceful Buddhists, it should noted that the Tibetans were historically known for their warlike nomadic horse culture prior to the introduction to Buddhism in the region note Which would make some sense in a degree since most of the Tibetan geography is mostly consist of mountains, rivers, hills, and lakes which makes it difficult to travel through by foot. At one point, the Tibetans even had an empire

that rivaled the Tang dynasty and even occupied the Tang capital Chang'an (modern-day Xi'an) for a while. Much of their warlike nomadic culture slowly died down once Buddhism was introduced in the region, but some of the Tibetan past nomadic lifestyle is still seen today in some areas (as there are many Tibetan nomads who still practice archery and horseback riding as sports), and Tibetans are closer culturally to the Mongolic and Turkic peoples than to the Chinese. The Tibetan Mastiff is held in high regards by Tibetans.

The Kingdom of Bhutan, sandwiched between China and India, was culturally part of Tibet until the 17th century. It was founded by a Tibetan Buddhist lama who had disagreements with the Dalai Lama of that time and decided to form a dominion of his own. Dzongkha, the country's national language, is descended from Old Tibetan and written with the Tibetan script (though it is mutually unintelligible with modern Tibetan) and Tibetan Buddhism is the country's state religion. Many Westerners view it as basically "Tibet if it were independent".

Having Tibet as a playable faction in historical video games makes sense, but due to China's strict censorship laws having Tibet as such a playable faction most likely means the game being Banned in China, as this would be seen as promoting Tibetan independence.note Not to mention, PC gaming is very profitable in mainland China This is why popular historical video games such as Civilization, Age of Empires or Total War will never have Tibetans as a playable faction, as these games will risk having the game banned in mainland China (as Paradox Interactive had to find out the hard way when Hearts of Iron was banned in China for depicting Tibet as a separate faction and all the sequels followed suit). Interestingly enough, however, Paradox Interactive also made two strategy games, Crusader Kings 2 and Europa Universalis series, that have Tibetans as a playable civilization; yet those games aren't banned in China (although the Chinese official releases would most likely have stringent censorshipnote For example, many games that would depict medieval Tibet will use the official Chinese name of medieval Tibet, Tubo or Tufan (吐蕃) instead of the more modern naming of Tibet (西藏)).

As the last-known flag of Tibet before 1959, this is reused by the government-in-exile, and thus Banned in China. The golden border signifies the spread of Buddhism. At the center is the golden sun of freedom and prosperity, which emits twelve rays, signifying the twelve clans descending from six aboriginal tribes, alternating between red and blue to signify the male and female guardian deities of the region. Directly below it is a white triangle representing the Himalayas. In its center are a pair of Tibetan lions, symbolizing the harmony of temporal and spiritual governance. On one paw they hold a yin-yang symbol, reminding the viewer of the eternal law of karma, and on the other the Three Flaming Gems (Buddha, Dharma and Sangha).