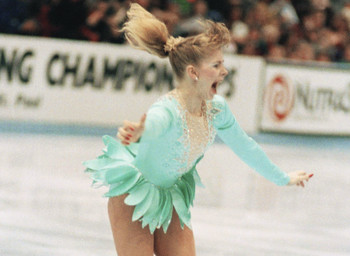 Tonya after landing the triple axel for the first time in competition
Advertisement:

She began skating when she was only four years old, and spent most of her life training, even dropping out of high school to devote more of her time to the ice. She was active in the mid-to-late 80s and early 90s. She won the 1989 Skate America Competition and placed first at the U.S Championships in 1991 and second at the worlds later that year. She also won the U.S Championships in 1994. She attended the 1992 and 1994 Winter Olympics, placing fourth and eighth respectively. In 1991, she was the first American woman to successfully perform a triple Axel, and only the second woman to do so in history.

Of course, you probably don't know her for that.

In January of 1994, fellow U.S Figure Skater Nancy Kerrigan was attacked outside of a figure skating practice. Investigation into the assault revealed that Tonya's ex-husband Jeff Gillooly had orchestrated the attack in order to help Tonya earn a spot for the 1994 Olympics. Despite never being legally charged with prior knowledge of the attack, many in the public assume that she knew more than she admitted, and she was later banned for life from the United States Figure Skating Association, and stripped of her 1994 U.S Nationals Title.

Since then, she has taken on various other jobs, including as a boxer, painter and deck builder, and television personality, most notably on World's Dumbest....

Her life was chronicled in the 1994 Made-for-TV Movie biopic Tonya & Nancy: The Inside Story, with Alexandra Powers as Harding and Heather Langenkamp of A Nightmare on Elm Street fame as Kerrigan, and the 2017 biopic I, Tonya, with Margot Robbie playing Harding. Robbie earned a nomination for the Academy Award for Best Actress for the role.