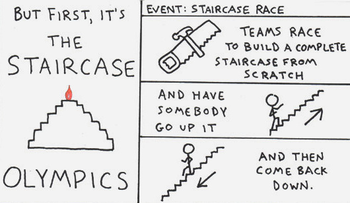 When it comes to the wide world of sports, no place is so lofty — no athlete so honored — than at the Olympic Games. So how the heck did these competitions get to be part of the Olympics?

This is the idea that any competition or game, no matter how silly, fantastic, or non-athletic, can be an Olympic Sport. And each may have their own teams, sponsors, and leagues, despite minor technicalities like not being scorable or not based on skill. The most egregious examples may even be Fictional Sports or Wacky Racing.

Since it includes all parodies of the Olympics it's typically Played for Laughs, but it can also be used to help build a fantastic setting. For example, a Science Fiction story could have a zero-G relay race at the Olympic Games IN SPACE!

This is also Truth in Television, because many sufficiently motivated groups have gotten their sports and games included in the Olympics and are now considered a normal part of the competition. See the Real Life section below for examples such as contract bridge and sculpture, which were past competitions or seriously considered competitions.