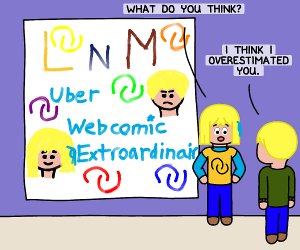 (also LnM) is a webcomic about a pair of twins, Sally and Sammy (nicknamed L and M respectively). It's primarily a gag-a-day strip that follows the daily lives of the twins.
Advertisement:

The creator concluded the comic in mid-September 2011.