Would Hit a Girl 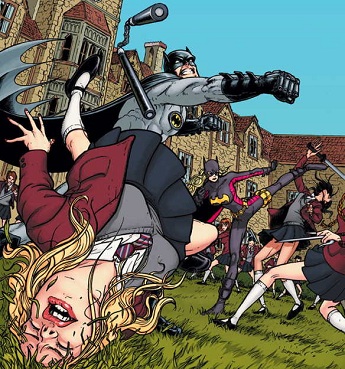 "The hammer of justice is unisex."
Erron Black: I grew up around tough women.
Cassie Cage: Didn't they teach you respect?
Erron Black: They taught me to hit back.
— Mortal Kombat 11
Advertisement:

A guy (good or evil) has no problems with violence against women.

If he's good, it's either because he's just not sexist and he believes in beating people up equally, or because he knows that holding back against female opponents is a good way to get his ass kicked or killed or endanger his friends/allies/muggles. In earlier works, the usual formula for invoking this was to say that he would "never hit a lady" - but "you're no lady" after the woman in question attacked him first or otherwise showed herself to be of low character.note This line is exploiting the dual usage of "a lady" as slang for any woman, and as a term for a woman who displays a certain level of decorous behavior. By failing to behave as "a lady" would, she's forfeited her right to be treated as one. Either way he stops as soon as she's no longer a threat.

If he's evil, it could be done in a multitude of ways. On the best end of the scale it could just be Equal-Opportunity Evil, like fighting Batgirl because she's a threat, and makes her look stronger when she beats him. More unpleasantly, it shows a Dirty Coward, attacking those weaker than him, and/or he's a bully who likes to make people afraid of him, or at the worst end of the scale, he's a sick monster who gets his kicks from hurting women. Ultimately, for it to be played as a villainous deed, it is necessary that the woman in question is not a threat to start with.

Naturally, modern female characters tend to go into battle fully expecting to be hit. If anything, many of them would probably be insulted if a male opponent went easy on them because of their sex. That said, an unprovoked attack on a girl, especially one who can't fight back, is still often played as a Kick the Dog moment, more so than if the genders were reversed. In milder works it is perfect as a Moral Event Horizon without the need for gore, torture, rape or death — it shows the villain will even hurt those who pose no threat.

In terms of censorship and editing on TV, any scene of male physical violence on females sometimes vary, including flashes, cutaways, or even trimming or cutting out the scene all together, to maintain a tasteful image. Even if it's the bad guy doing it.

This can often overlap with What Measure Is a Non-Human?, where even a hero who would not usually hit a girl has no qualms about it if she is some kind of witch, alien or whatever. In these cases, it may be more or less justified, depending on how obviously inhuman the female enemy is.

The opposite trope is, of course, Wouldn't Hit a Girl. When hitting girls is Played for Laughs it can be a case of Slapstick Knows No Gender. Obviously not present when a woman hits a woman. If the circumstance is designed so that women are only hit by other women than it is a Designated Girl Fight.

"I believe in gender equality!

Klaus punches Hayley in the face when she demands that he give Stan his body back.

Klaus punches Hayley in the face when she demands that he give Stan his body back.