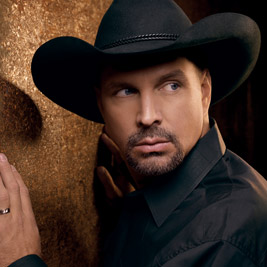 Troyal Garth Brooks (born February 7, 1962) was, quite simply, the voice of country music for the better part of The '90s. In the entirety of the American music, only Elvis Presley has sold as many albums as Garthnote and there's some dispute in those numbers, though Garth is happy to concede to the King. His Ropin' The Wind was one of the first albums to be certified Diamond by the RIAA, and was the first country album ever to debut at #1... on the Billboard 200 album chart that tracks all albums, not just country albums. (For reference, it held the spot between The Black Album by Metallica and Use Your Illusion II by Guns N' Roses.)

The vast majority of his albums during his peak on Capitol Records drew from the same pool of session musicians (Bruce Bouton, Mark Casstevens, Mike Chapman, Rob Hajacos, Chris Leuzinger, Milton Sledge, and Bobby Wood), longtime producer Allen Reynolds, and longtime sound engineer Mark Millernote not the lead singer of Sawyer Brown, collectively known as the "G-Men". Recurring writers such as Pat Alger, Tony Arata, Kim Williams, Victoria Shaw, and Kent Blazy shaped some of his biggest hits, although he was no slouch to writing his own material or covering obscurities from others. His most famous songs range from slick ballads ("The Dance", "Unanswered Prayers", "What She's Doing Now", "The River") to working-class anthemic songs ("Friends in Low Places", "Shameless", "More than a Memory"), with various other styles in between.

While he may not be the best singer of country songs (something which he himself will be the first to admit), he may well be the best showman country music has ever had, and his integration of pop/arena rock staples into his shows (most notably the use of a headset microphone to allow him to run around stage) brought life and energy to a genre that was increasingly viewed as growing stale and stagnate, helping to bring about a new generation of country stars. He's had half a dozen nationally televised concerts, including memorable ones in Texas Stadium (which installed two bridges to support his antics; the "Garth Bars" remained until the stadium was demolished), Central Park in New York, Croke Park in Ireland, The Wynn in Las Vegas, and Notre Dame in Indiana.

About the only thing Garth did that didn't turn to gold was his alter ego, Chris Gaines, a bizarre side-project where he pretended to be another artist and released music that was almost completely different from his normal output. This was supposed to be for a movie, with The Life of Chris Gaines album supposed to be the soundtrack for it, but because there was no movie, there was no context, and the whole thing looked like some crazy ego trip. Unbelievably, this failed alter-ego project gave Brooks his sole US Top 40 hit with the ballad "Lost in You." Until that point, he had never actually pursued pop radio, except through a cover of KISS' "Hard Luck Woman", and was a firm holdout of selling traditional singles, one reason for his massive album sales. As the music landscape later transformed, he became one of the final stars to resist the streaming revolution; most of his music remains unavailable for free on most platforms.

Going into the 21st century, in the wake of his divorce from his first wife, he entered into semi-retirement in order to spend time with his daughters, intending to return to music full time in 2014 when his youngest turned 18. In 2005, he married fellow country singer Trisha Yearwood, who had been his opening act on his tours for years and done multiple duets with him (most notably "In Another's Eyes") and whom he first began dating in 2000. During this semi-retirement, he occasionally performed at special occasions and benefit concerts. From 2009 to 2014, he had a Las Vegas residency titled Garth at Wynn, where he would periodically perform a couple of shows every few months at the Encore Theatre. In 2012, Brooks was named to the Country Music Hall of Fame, an honor was almost inevitable given his accomplishments.

Brooks came out of retirement again in late 2013 for a concert in Las Vegas. The concert was included as part of a box set that also comprised four discs' worth of cover songs. He then announced a full comeback in 2014, with a studio album for RCA Records, Man Against Machine, and a full tour which lasted over three years and featured Yearwood in every show. The album was released in November 2014 and was certified Platinum in less than two months. In September 2016, he got his own channel on Sirius XM radio, which he kicked off with his first-ever concert at Nashville's historic Ryman Auditorium. Later that year came his next original album, Gunslinger, from which "Ask Me How I Know" became his 20th #1 single on the country charts. His latest album, Fun, came out in November 2020; three singles had already been released from it as early as 2018, including a duet with Blake Shelton.

Despite being the face of a genre of music traditionally associated with conservative values, Brooks is also known for having been an advocate for gay rights since the early '90s, due to his half-sister/bandmate Betsy Smiddle being a lesbian. Brooks was vocal about this stance far before most artists of his stature in the country sphere were, and at a time where such advocacy likely could have incurred a boycottnote he got away with it due to being, well, Garth Brooks. He insisted on having his first single on The Chase be "We Shall Be Free", a song calling for greater tolerance in the United States, and played hardball with NBC and the National Football League by threatening to pull out of playing the national anthem 15 minutes before the Super Bowl unless they agreed to air its music video, an act that won him a GLAAD award in 1993. This barely made a dent in his popularity, and it's a common joke/observed truth in America that few artists could reach across the political aisle like Brooks. In 2021, he performed "Amazing Grace" at Joe Biden's inauguration.

...just wait 'til I finish this glass... then sweet little lady, I'll head back to the bar... and you can kiss my ass!