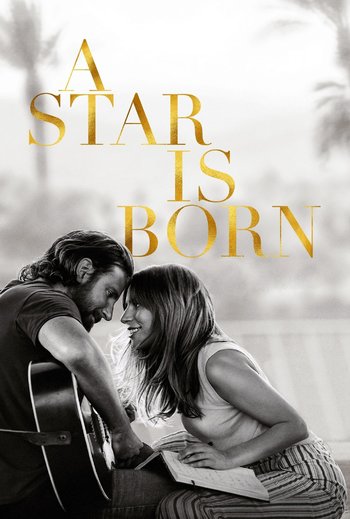 "We're far from the shallow now."
"I'll always remember us this way."
Advertisement:

A Star is Born is a 2018 romantic musical drama directed by Bradley Cooper (in his directorial debut), starring himself and Lady Gaga. It's also the fourth version of A Star is Born to be made, following the original film in 1937 and the remakes in 1954 and 1976. Like the 1976 version, it is set within the music industry.

Jackson Maine (Cooper) is a veteran musician who discovers struggling singer Ally (Gaga) in a night club, and quickly takes her under his wing. Their mentor-protege relationship soon turns romantic, but as Ally's career takes off under Jackson's guidance, his begins winding down, which leads to strife between them.

A Trope is Born: