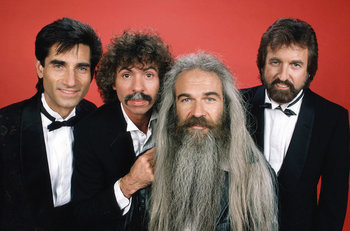 A long-lasting Country Music group, although they weren't originally one. The band began in the 1940s as the Oak Ridge Quartet, a Gospel Music group composed of Wally Fowler, Lon Freeman, Curly Kinsey and Johnny New. The group split from Fowler in 1949, and several membership changes later, Smitty Gatlin headed a new lineup in 1957. He also pushed the band to a more country-folk sound, changed their name to the Oak Ridge Boys in 1961, and recruited baritone vocalist William Lee Golden in 1964. After Gatlin retired, Duane Allen joined as lead vocalist, and Noel Fox and Willie Wynn took over on bass and tenor.

In the 1960s and into the early '70s, the band achieved some notability in the gospel field, and even won a Grammy Award. By 1973, Joe Bonsall had taken over on tenor vocals and Richard Sterban on bass vocals, thus forming the most popular and well-known lineup of Allen (lead), Bonsall (tenor), Golden (baritone), and Sterban (bass). After a few false starts, including a guest appearance on a low-charting Johnny Cash single and a few dud releases on Columbia Records, the Oaks broke through in 1977 with the Top Ten hit "Y'all Come Back Saloon". From then until the late '80s, they would remain a constant fixture on the country charts. "Elvira" and "Bobbie Sue" netted the group a couple crossover pop hits. Golden was fired in 1987 and replaced with Steve Sanders, who remained until 1995 when Golden was allowed to return.

Although the hits dried up in the early 1990s, the Oaks are still recording to this day and remain a popular touring group, even to generations that were born well after their last hits.

Their songs are sometimes confused with ones performed by The Statler Brothers, which is understandable since they both started out in gospel and had the same vocal configuration (tenor, lead, baritone, bass). Musically, however, the most well-known version of the Oak Ridge Boys was more of a contemporary country-pop group, while the Statlers tended to stick with more traditional country, and the distinction was even greater visually, as the the Oaks typically wore their regular clothes while the Statlers favored three-piece suits.