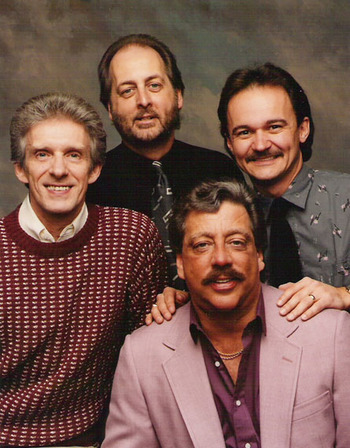 A long-running (nearly 50 years!) Country Music quartet from Stauntonnote pronounced "STAN-ton", Virginia. The founding members were lead vocalist Don Reid (born June 5, 1945), bass vocalist Harold Reid (August 21, 1939 – April 24, 2020), baritone Phil Balsley (born August 8, 1939), and tenor Lew DeWitt (March 8, 1938 – August 15, 1990). DeWitt left in 1983 due to health issues and was replaced by Jimmy Fortune (born March 11, 1955). The group released "Flowers on the Wall" in 1965, a song that became a huge crossover hit and even netted them a Grammy Award. From then until the late 1980s, they were a somewhat constant presence on the country charts, scoring even more Signature Songs along the way, such as "Do You Remember These", "The Class of '57", "I'll Go to My Grave Loving You", "Do You Know You Are My Sunshine", "The Official Historian of Shirley Jean Berrell" and "Elizabeth".

Due to the typical makeup of vocal groups (tenor, lead, baritone, bass), their songs are sometimes confused with those performed by The Oak Ridge Boys. Musically, however, the Statlers always maintained a strong connection to Gospel Music, which the latter group moved away from; the distinction was even greater visually, as the Statlers typically wore coordinated three-piece suits onstage while the Oak Ridge Boys favored their regular clothes.

The Statler Brothers continued to tour until 2002.

Countin' tropes upon the wall, that don't bother me at all: