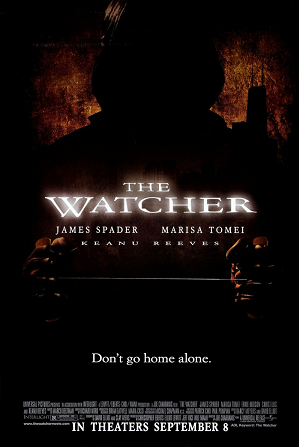 The Watcher is a 2000 film starring Keanu Reeves and James Spader.

The film is about Joel Campbell (James Spader), a retired FBI Agent in Chicago who is struggling about failing to capture a Serial Killer, David Allen Griffin (Keanu Reeves). He attends therapy sessions with his female psychologist (and love interest) Dr. Polly Beilman (Marisa Tomei). When he gets back to his apartment, Joel finds that a girl who lived in his building was murdered. He fails to find any significance or connection in the murder to himself until he finds out that a picture of the victim was sent three days ago before the murder. To his room.

The serial killer, David Allen Griffin, has followed Joel to Chicago, his mind set on playing a fun game of cat and mouse with him. Joel is back on the case to catch him, no matter what it takes.