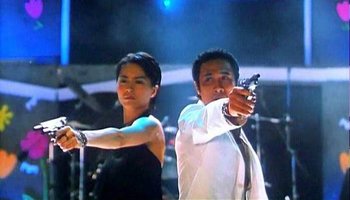 Anyone who saw more than 5 John Woo films would know what kind of movie this is.
Advertisement:

A War Named Desire is a 2000 Hong Kong action drama starring Francis Ng, Daniel Chan and Gigi Leung. The movie itself is a Genre Throwback to older John Woo movies, particularly those of the 80s, with themes of brotherhood, bloodshed, and plenty of drama developing its main characters.

The Fong brothers, Charles Fong (Francis Ng) and James Fong (Daniel Chan) are raised by their grandmother after their parents' deaths, but when they were eight, Charles ran away from home and was never seen again. James despises his brother for leaving him, but life goes on anyway until decades later, after his grandmother's passing, James finds out Charles is now in Bangkok working as a hitman and assassin.