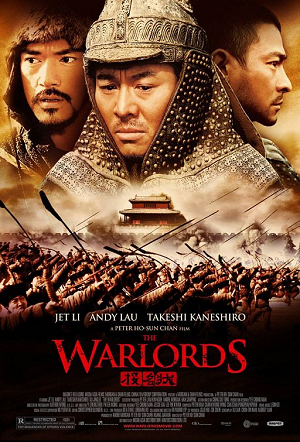 The Warlords (投名狀; Exactly What It Says on the Tin) is a Hong Kong Epic Movie directed by Peter Chan and starring Jet Li, Andy Lau, Takeshi Kaneshiro and Xu Jinglei. Released on December 13, 2007, The Warlords is set during the 1860s when the Taiping Rebellion

was underway in the late Qing Dynasty of China. The story is based loosely on the Real Life assassination of Qing general Ma Xinyi

Pang Qingyun (Jet Li) is a general of the Qing army and following a crushing defeat by the Taiping where he's the Sole Survivor, he stumbles onto a village and is nursed back to health by a woman named Liansheng (Xu Jinglei). The village is comprised of bandits, who rob convoys from the Qing and Taiping for their supplies in order to feed themselves. Following a successful raid on a Taiping battalion, the Qing army attacks the village and seizes the supplies for themselves. Through convincing Liansheng's husband Zhao Erhu (Andy Lau), Jiang Wuyang (Takeshi Kaneshiro) and other men in the village, Qingyun reforms an army to fight the Taiping, in hopes the village won't have to starve from the on-going war. To secure their friendship, Qinyun, Erhu and Wuyang swear a Blood Oath, with death as their punishment should they break their new bond.

The film plays heavily on the Sliding Scale of Idealism Versus Cynicism: ideally, the Blood Brothers want to end the war quickly as possible, with hopes their loved ones back home can be safe and secure; cynically, The Warlords showcases how brutal one of the most bloodiest, largest and near-forgotten conflicts in Asia truly was, but also how ambition, back-door politics, and conspiracies are what drives men to deeper extremes.

The movie is a remake of the old Shaw Brothers epic, Blood Brothers (1973), although with the names of the protagonists changed and with a slightly altered ending.

Notably, The Warlords was the first collaboration between Jet Li and Takeshi Kaneshiro in a decade, ever since Dr. Wai in "The Scripture with No Words".

The Warlords contains examples of the following: