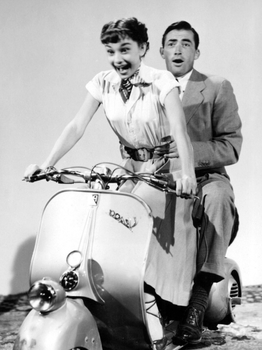 She'll liven up your life... whether you like it or not!
"I brake for birds! I rock a lot of polka dots! I have touched glitter in the past 24 hours! I spent my entire day talking to children! And I find it fundamentally strange that you're not a dessert person; that's just weird and it freaks me out! And I'm sorry I don't talk like Murphy Brown! And I hate your pantsuit. I wish it had ribbons on it or something to make it slightly cuter!"
— Jessica Day, New Girl
Advertisement:

Let's say you're a soulful, brooding male hero, living a sheltered, emotionless existence. If only someone could come along and open your heart to the great, wondrous adventure of life...

Have no fear, the Manic Pixie Dream Girl is here to give new meaning to the male hero's life! She's stunningly attractive, energetic, high on life, full of wacky quirks and idiosyncrasies (generally including childlike playfulness), often with a touch of wild hair dye. She's inexplicably obsessed with our stuffed-shirt hero, on whom she will focus her kuh-razy antics until he learns to live freely and love madly.

The Manic Pixie Dream Girl may be featured as the Second Love, in order to break the character out of The Mourning After. If he's a cynic, her goal may be to convince him that Silly Rabbit, Cynicism Is for Losers!. Finally, she may be presented as a cheerful variety of Threshold Guardian, all the way from less uptight to psychopomps happily welcoming their clients into "another adventure".

It's a long-standing trope (around since at least 1283), but the term was coined in 2007 by film critic Nathan Rabin, who found it grating, as he believed it to be the result of Wish-Fulfillment from stir-crazy writers. He explicitly compared it to the Magical Negro, in that a Manic Pixie Dream Girl exists to help the protagonist achieve happiness without ever seeking any independent goals herself. Rabin would later

Despite all that (or because of all that), there are ways of utilizing this trope without falling into that pitfall. Given enough time, Character Development can add to their personality and interests and pull them away from the MPDG foundation. The story may even be told from their perspective, revealing that there is more to them than bringing adventure to brooding guys. A MPDG with independent story arc and depth of character can even be the true main character of a work, with her companion being a hapless Drag Along recruited to assist her goals—his world-expanding adventure is incidental to her need for someone to carry the cooking pots and backup hang glider.

Deconstructions of the idea may show that they resent being considered only useful for the benefit of the main character, idolized as something that they are not, or that once the main character reaches their "enlightened" stage, the MPDG moves on to the next person who needs their help. An alternative type of deconstruction is for a character introduced like this to turn out to be dangerously unstable, tipping over into Cute and Psycho, or (more realistically) a damaged and unhealthy individual whose childishness, naivete, and irresponsibility quickly either cause them to wear out their welcome, or suck the main character into a codependent mess that can only end badly.

A subtrope of Blithe Spirit, and related to Magical Girlfriend, Loony Friends Improve Your Personality, Uptight Loves Wild, and Damsel Errant. From the girl's perspective, this trope becomes Single Woman Seeks Good Man, though whether the hero qualifies varies.

Compare Cloudcuckoolander, Genki Girl, Perky Goth, Uptight Loves Wild, Savvy Guy, Energetic Girl, Pom-Pom Girl, and Quirky Ukulele for similar personality roles. May also overlap with Trickster Girlfriend if she enjoys playing tricks on the protagonist and deliberately misleading him just for the fun of it. Sometimes the Manic Pixie Dream Girl is a Hypercompetent Sidekick. Contrast Nerd Nanny and Yamato Nadeshiko for examples of calmer and more mature ladies. The Screwball Comedy is a genre driven entirely by this character type.

Although not quite Always Female, a "Manic Pixie Dream Guy" is a much rarer concept. "Manic Pixie Dream Guys", where they exist, tend to either be young (e.g., a Kid Sidekick) or immature. If the latter, expect them to learn just as much from their cynical partner as they teach (the cynic learns to enjoy life more while the immature one learns responsibility).