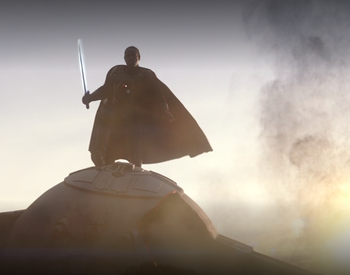 Moff Gideon is Not Quite Dead? And he has the frickin' Darksaber?!
The awesomeness of live-action Star Wars, now brought to you on the small screen by Jon Favreau and his crews with state of the art blockbuster craft.
Advertisement:
open/close all folders

Chapter 9: The Marshal
Chapter 10: The Passenger
Chapter 11: The Heiress
Chapter 12: The Siege
Chapter 13: The Jedi
Chapter 14: The Tragedy
Chapter 15: The Believer
Chapter 16: The Rescue