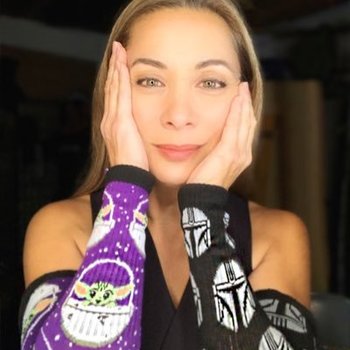 "You have the right to defend yourself against hatred and self-hatred."
—Diana Lee Inosanto as Karen O'Neil, The Sensei
Advertisement:

She grew up surrounded by martial arts and studied many forms of them, including Jeet Kune Do and Eskrima, which she learned from her father, Dan Inosanto, a student and training/movie partner of Bruce Lee (he appeared in Game of Death, most notably). Lee was also her godfather, he's the reason behind her middle name.

She's been doing stunt work, choreography and stunt training in film and television productions since the mid-1990s, and she's had some acting credits among these. She made her directorial debut with The Sensei

Her acting roles include: