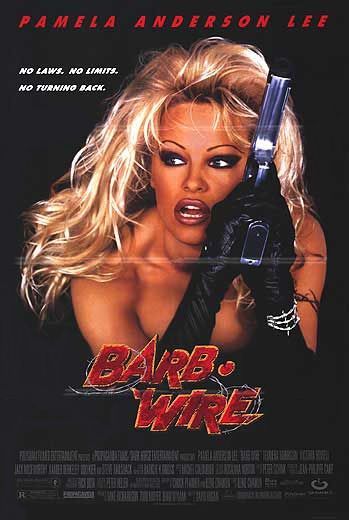 No clothes either.
Advertisement:

The Film Of The Comic Book.

Released in 1996, the movie stars Pamela Anderson Lee as a nightclub owner/mercenary/Bounty Hunter in 2017 during the Second American Civil War. The Chief of Police raids her club because he is looking for a scientist who has information about a superweapon.

The film is based on the eponymous series printed by Dark Horse Comics during their attempt at creating a shared comic book universe, Comics' Greatest World, which resulted in an In Name Only compared with the source.

Barb Wire was panned by critics and bombed at the box office (making less than $4 million). The failure of the movie also effectively ended Pamela Anderson's dream of becoming a mainstream film star, and it would be 19 years before any more Barb Wire comics would be printed.