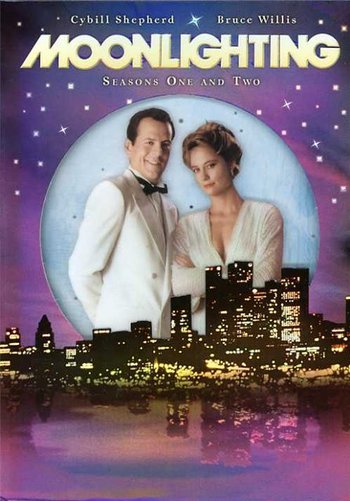 "We'll walk the night, we'll fly by day/Moonlighting strangers who just met on the way..."
Advertisement:

This 1985–89 series on ABC was arguably the coiner of the term Dramedy. It starred Cybill Shepherd as Maddie Hayes and a then-relatively unknown Bruce Willis as the wisecracking David Addison.

The premise was simple. Model Madelyn Hayes found out that her accountant had embezzled her fortune and run off with it. Her only remaining assets were a series of losing businesses maintained as tax write-offs. The worst of the lot was the City Of Angels Detective Agency. Maddie, with no prospects and not the first idea of how to run a detective agency, decided to close it down to pay off quickly rising debts. Visiting the agency to deliver the pink slips introduced her to the quirky Agnes DiPesto, who answers the phone in rhyme, and the zany, wisecracking David Addison, who wasn't ready to let the agency go without a fight, even renaming it the Blue Moon Detective Agency in order to link it with Hayes' most famous role: the "Blue Moon Shampoo Girl". Despite their oil-and-water chemistry, David was able to persuade Maddie to keep Blue Moon on life support, insisting that it could be profitable if it was permitted to be; however, Maddie insisted on managing the firm directly.

But what really made the show stand out was its penchant for Breaking the Fourth Wall, where on occasion the characters would talk to the audience or otherwise show knowledge that they were characters in a television show ("Don't go much lower. They'll take us off the air."). This progressed in later seasons to become a pure No Fourth Wall series.

It's perhaps best known for being the classic example of how a show can fall apart when Unresolved Sexual Tension is resolved (in fact, outside of this wiki, Shipping Bed Death will occasionally be known as the "Moonlighting Curse",) or how a hit show collapses due to a perfect storm of behind the scenes chaos. When the fifth season was shortened due to a TV strike, ABC put the show down.

"Moonlighting tropers who just met on the way":