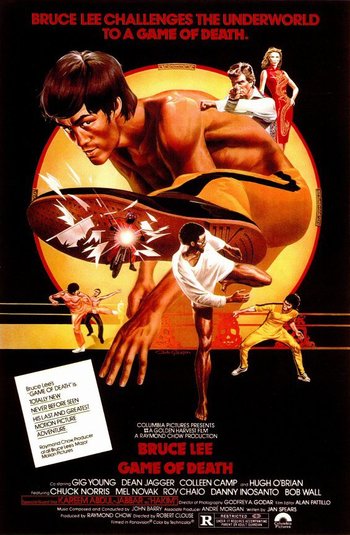 In late 1972, Bruce Lee was in the middle of making the film that was to showcase his personal style of Jeet Kune Do, The Game of Death, when he received an offer to star in Enter the Dragon. The first kung fu film to be produced by a Hollywood studio, and with a budget unprecedented for the genre, it was an offer Lee was unable to refuse. He was slated to resume filming The Game of Death as soon as his work on Enter the Dragon was finished. Alas, before EtD was even released, he died.

So the uncompleted footage for The Game of Death sat and collected dust, some of it getting misplaced and lost. Greedy producers weren't about to let this stand, so in 1978, they enlisted the director of EtD, Robert Clouse, to make a new film using the surviving footage, footage from other times in Lee's career, and newly-filmed footage. The result is known simply as Game of Death.

TGoD was to be about Korean thugs coercing Lee's character, Hai Tien, into helping them retrieve a treasure from the top of a guarded pagoda, wherein they would have to fight a different martial artist on each of its five floors. GoD does away with this and features an entirely new plot. Billy Lo (played at various stages by Yuen Biao, Kim Tai Chung, and Chen Yao Po) is a renowned martial arts movie star. A trafficking syndicate wants his aid, and he refuses. When they fail to intimidate him, they order his assassination instead. Lo makes the attempt look like a success, and then uses the cover of supposedly being dead to bring the syndicate down.

The film uses only 11 minutes of footage from TGoD, in which Lee is genuinely the actor used to portray Lo. This fight scene is one of the most treasured in the history of martial arts movies, and probably the only reason to watch the film. In addition to it being the last time audiences would ever see Lee fight, it is also known for the costume Lee dons during it: a bright yellow track suit with black stripes up the sides. This suit has come to be seen as something of a trademark for the actor, homaged numerous, numerous times. The homage to it that you most likely know of, however, is when Uma Thurman dons a motorcycle race suit in the same style whilst fighting the Crazy 88 in Kill Bill.

An unrelated movie made due to high demand for more Bruce, using recycled Lee footage as well as deleted Enter the Dragon footage, new scenes choreographed by Yuen Woo-Ping and Kim Tai Chung, called Tower Of Death, was released in 1981 and in some markets called Game Of Death II.

open/close all folders
Both versions

Both versions provide examples of:

The 1972 original version provides examples of:

The 1978 version provides examples of: