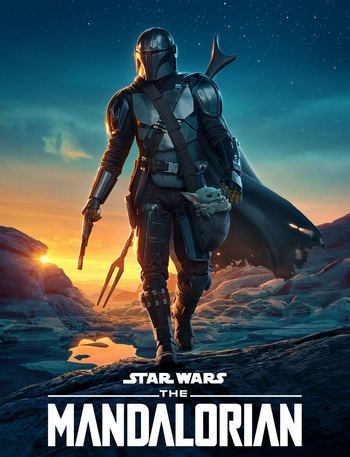 This is the Way.
"When one chooses to walk the Way of the Mandalore, you are both hunter and prey."
— The Armorer
Advertisement:

Star Wars: The Mandalorian, more commonly known and marketed as The Mandalorian, is a Space Western series set in the Star Wars universe, and the first live-action television series in the history of the franchise. It is created by Jon Favreau, executive produced by Favreau, Dave Filoni, Kathleen Kennedy, and Colin Wilson, and co-executive produced by Karen Gilchrist. Directors for the first three seasons include Favreau, Filoni, Rick Famuyiwa, Deborah Chow, Bryce Dallas Howard, Taika Waititi, Peyton Reed, Carl Weathers, and Robert Rodriguez.

Set five years after the fall of the Galactic Empire, the show follows a Mandalorian Bounty Hunter (Pedro Pascal) operating in the lawless Outer Rim, as he works to support his clan's hidden enclave. Known simply as "Mandalorian" or "Mando" to most, his name is later revealed to be Din Djarin. After accepting a shady job from a group of Imperial holdouts, he is shocked to discover that his target is a strange alien infant with supernatural powers.

Despite some initial reluctance, the bounty hunter ultimately decides to go on the run and safeguard the innocent child from the sinister forces hunting it. But soon enough, he realizes that protecting this child will be far more complicated than it first seems, and that the Imperials hunting it are more than your average remnant...

The show began airing exclusively on Disney+ as the platform's launch day flagship on November 12, 2019. Season 2 premiered on October 30, 2020, and was renewed for a third season before Season 2 finished airing.

During the second season in December 2020 it was announced that three spinoffs of the series had been ordered: The Book of Boba Fett note (starring Temuera Morrison as Fett, reprising his role from season two) premiering on December 29, 2021, Ahsoka note (starring Rosario Dawson as Ahsoka Tano, reprising her role from "Chapter 13: The Jedi"), and Rangers of the New Republic. However, on May 22, 2021, Lucasfilm announced that Rangers was "no longer in active development", followed by a statement from Kathleen Kennedy that they would try to work some of its story into future Mandalorian episodes instead. The first two aforementioned series would eventually come together for a crossover event.

On May 4, 2020 ("Star Wars Day", as in "May the Fourth be with you"), Disney+ launched a behind-the-scenes documentary series titled Disney Gallery, covering the making of The Mandalorian and its spin-offs.

The Mandalorian provides examples of:

open/close all folders
#-M
N-Z
"It is good to restore the natural order of things... after a period of such disarray, don't you agree?"
Feedback

Being stuck on a New Republic Prison Barge is bad. Stuck on one with a Mandalorian is outright horrifying.

Being stuck on a New Republic Prison Barge is bad. Stuck on one with a Mandalorian is outright horrifying.