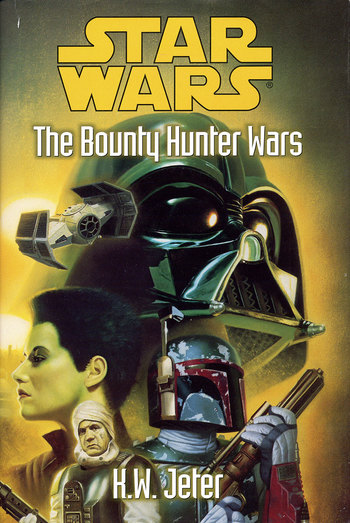 The Bounty Hunter Wars is a relatively old Star Wars Legends trilogy by K.W. Jeter that details what happened to Boba Fett after his fall in the Sarlacc, his recovery, and his partnership with Dengar. It has some overlap with a few of the stories found in the Tales of the Bounty Hunters anthology collection. Along with stories like Enemy of the Empire, it takes place before Fett was revealed as a clone and before the Mandalorian Proud Warrior Race Guy backstory was set in stone.
Advertisement:

There's also a parallel flashback storyline covering Fett's time in the Bounty Hunters' Guild, his one-sided rivalry with Bossk, a behind-the-scenes plot orchestrated by the Corrupt Corporate Executive Kuat of Kuat, and an ongoing subplot revolving around the rivalry between Darth Vader and Prince Xizor, leader of the Black Sun crime syndicate, which was also an important feature of the Shadows of the Empire multi-media Interquel.