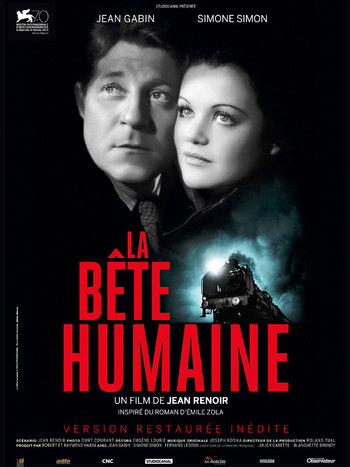 Lantier (Gabin) is a railroad engineer who drives a train between Paris and Le Havre. He's a taciturn fellow who is well-liked by his fellow railroad men. He is very fond of his train engine, which he gives a woman's name, "Lison." He is not as close with any real women, for a very good reason. Lantier has a teeny-tiny little problem: moments of physical intimacy with women can cause him to slip into a fugue state—a "haze"—in which he is subject to murderous fits. This is established in an early scene where Lantier is canoodling with a young woman, only to slip into one of his hazes and start strangling her; her life is saved only by the whistle of an oncoming train which snaps Lantier out of it. Unlike your average Norman Bates-style psycho, Lantier is aware of this itty-bitty problem and thus spends most of his time with his train.

Meanwhile, Le Havre station master Roubeau and his wife Severine (Simone Simon) have less psychotic but still very real problems. Roubeau, balding and pot-bellied, is prone to moments of violent jealousy over his young, gorgeous wife. When Roubeau finds out that Severine was once the mistress of rich railroad baron Grandmorin, he snaps. He forces Severine to lure Grandmorin onto a train, where Roubeau stabs him to death.

The horror of watching Grandmorin murdered extinguishes any feelings Severine might have had for her husband. Now she wants out of the marriage and, knowing what kind of a jealous psycho her husband is, she looks for a lover who will kill her husband and free her. She makes what, unbeknownst to her, is the worst choice possible: Lantier.

Adaptation of a novel of the same name by Emile Zola. Remade in Hollywood in 1954 as Human Desire, directed by Fritz Lang.