Film / The Rules of the Game 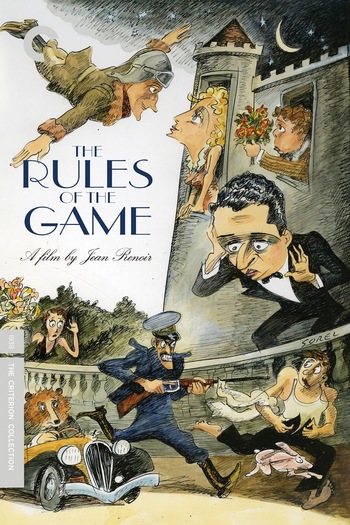 "I wanted to depict a society dancing on a volcano."
— Jean Renoir
Advertisement:

La Règle du jeu (English Title: "The Rules of the Game") is a 1939 French film, written and directed by Jean Renoir, starring Marcel Dalio, Ronald Toutain, Nora Gregor, Paulette Dubost, Mila Parély, Julien Carette, Gaston Modot, Pierre Magnier and Renoir himself as Octave. It's a Hyperlink Story of multiple characters gathering at a country estate in France in the late-thirties, modeled on the classical French tradition of Farce and comedy of manners.

The famous aviator André Jurieux (Roland Toutain) lands at the airport after completing a record-breaking feat. However, in front of the mass media gathered there, and in a moment of agitation, Jurieux publicly expresses his sorrow that Christine (Nora Gregor) is not there to greet him. The problem. Christine is a wealthy bourgeois married woman. Her husband, the Marquis de la Chesnaye (Marcel Dalio) hears this public Anguished Declaration of Love as does their entire social set. In order to save face and set right Jurieux's error, his friend Octave (Renoir) goes over and convinces the Marquis that the only way to smooth things over is arrange a party at a Country estate, bring everyone they know there, invite André and show that it's no big deal. So everyone gathers at La Colinière, in Sologne.

What follows is a series of Gambit Pileup and intricate network of plots and subplots, criss-crossing each other (sometimes in the same shot). The drama involve not only Octave, the Marquis, André and Christine, but also the servants at the estate, such as the poacher Marceau (Julien Carette), the gamekeeper Schumacher (Gaston Modot) and everyone else who stops by and makes a comment here and there. Everyone acts and fights in the name of love and honour, but the words rapidly lose their meaning and value in the midst of all the craziness.

Renoir's film was technically and narratively innovative. It featured the use of deep focus before Citizen Kane. The film faced a difficult exhibition complicated by the fact that World War II broke out shortly after its release, and for a long time, the film was difficult to properly see and appraise, until the end of the war, and a series of restorations. The film is available on The Criterion Collection.