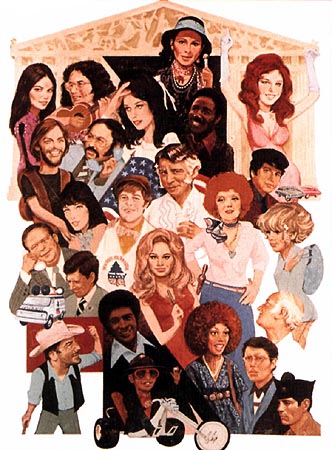 "Twenty-four of your favorite stars!"
"You get your hair cut; you don't belong in Nashville."
— Haven Hamilton
Advertisement:

One of Robert Altman's most acclaimed films, the 1975 comedy-drama Nashville boasts an ensemble cast of 24 — count 'em, 24 — principal characters, whom it follows around the country music capital of Nashville over the course of the five days leading up to a concert being staged on behalf of a third-party candidate for the U.S. presidency.

There is no exact definition of who is and isn't a main character, but here are the ones that get the most screen time:

The screenplay was written by Joan Tewkesbury, who'd collaborated with Altman on Thieves Like Us one year earlier.