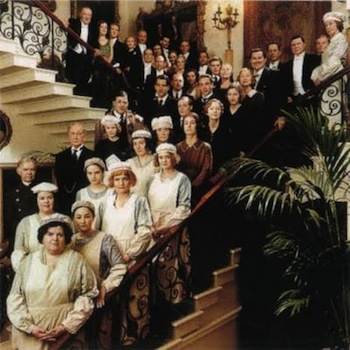 Sir William McCordle, a rich guy, invites some more of his rich friends to a shooting party at Gosford Park. They also bring all their servants.

More than just a basic murder mystery story, Gosford Park focuses more on the servants and the division between both ends of the British class system than the rich murdered guy and his rich "friends". The whodunnit plot is used as a device to examine the characters and their relationships with one another, and as a reason for the film to come to an end.

Many of the scenes feature the ensemble improvising dialogue in character, and since the camera is seldom still, the audience drifts from conversation to conversation like an eavesdropper. There are also a lot of sub-plots, which would take forever to cover here.

The screenplay is by Julian Fellowes, who would later create the popular British television drama Downton Abbey. Like Gosford Park, it would be set in an English manor house and star Maggie Smith.