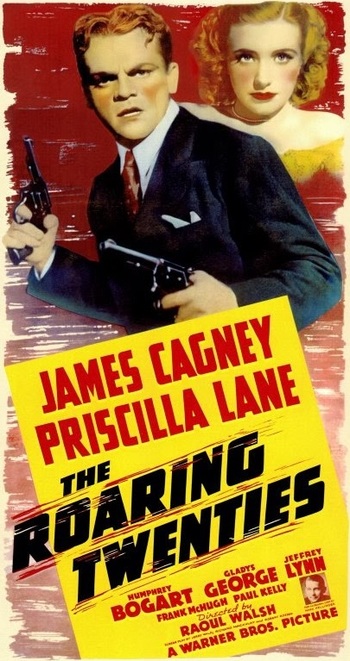 "Today, while the earth shakes beneath the heels of marching troops, while a great portion of the world trembles before the threats of acquisitive power-mad men, we of America have little time to remember an astounding era in our own recent history. An era which will grow more and more incredible with each passing generation until someday people will say it never could have happened at all."
— Opening Monologue
Advertisement:

It opens during World War I, where three very different soldiers meet in a foxhole. One of them is Eddie Bartlett (Cagney), a simple garage mechanic from a city that is probably New York. He returns home only to find that his job has been given away. As he struggles to earn money as a cab driver, a mix up results in his arrest. To thank him for keeping his mouth shut, speakeasy owner Panama Smith (George) bails him out of jail, and the two go into business with each other.

Considered by many to be the definitive gangster picture. Not to be confused with the era of the same name (in which most of the film is set though).