Film / They Drive by Night 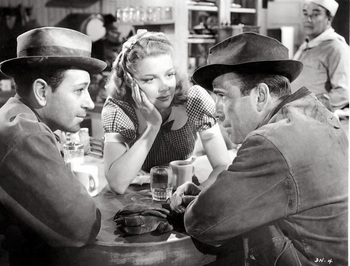 Who knew the guy on the right would come out the star?
Advertisement:

They Drive by Night (1940) is a Warner Bros. crime drama film directed by Raoul Walsh, starring George Raft, Ann Sheridan, Humphrey Bogart, and Ida Lupino. It's frequently cited as an early example of Film Noir. It is based on the novel The Long Haul by A. I. Bezzerides.

Two brothers, Joe (Raft) and Paul (Bogart) Fabrini, are living the perilous life of truckers, fighting to get a decent wage and living without their loved ones. Joe eventually finds love with Cassie (Sheridan) and things seem to improve when the brothers sign up with a new employer, Ed Carlsen (Alan Hale Sr.). Unfortunately, two tragedies strike: Paul loses his arm in an accident while things get rocky for Joe when Ed’s wife, Lana (Lupino), tries and begins to scheme against her husband to be with Joe.

Things only get worse from there.

Semi-remake of 1935 film Bordertown. Not to be confused with Nicholas Ray's 1948 film They Live by Night.

They Drive by Night shows examples of: