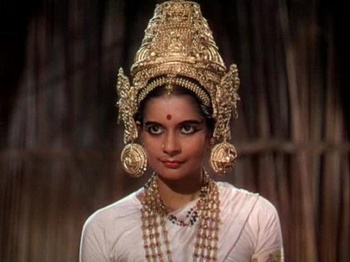 The River is a 1951 film directed by Jean Renoir.

It is set in India, sometime during The Raj. The protagonist is a tween girl named Harriet, whose father manages a jute mill. Their large family includes four younger sisters for Harriet and a little brother affectionately called "Bogey". They live in a mansion on the Ganges River, hence the title. Harriet is best friends with an older girl, Valerie, whose father owns the jute mill. Harriet and her family are neighbors with one Mr. John, a white man who had a now-deceased Indian wife. Mr. John has a daughter, Melanie, who is about Valerie's age.

Into this mix comes Mr. John's cousin, Captain John, an American who lost his leg in "the war". Harriet develops an immediate and intense crush on the handsome captain. Capt. John pays little attention to the affections of a girl of about 12, but is much more receptive to the older Valerie—but he pays the most attention to Melanie.

Jean Renoir's first film in color. Shot entirely on location in India; it was the first Technicolor film made there. Satyajit Ray got a job as an assistant in the production.