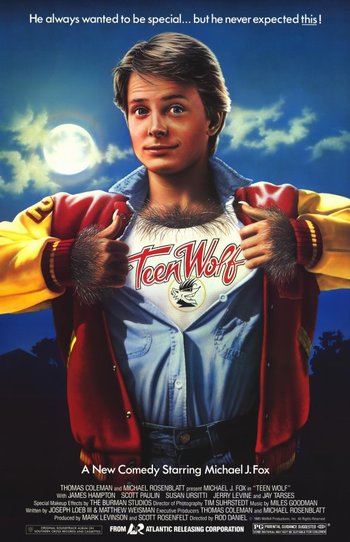 Scott Howard (Michael J. Fox) has a problem. Well, several problems. He's an average high school student with few friends, he's a mediocre player on a losing basketball team, and the girl of his dreams won't even look twice at him. His dad works at a hardware store, and he's generally the Butt-Monkey of the entire high school.

Scott just wants to be recognized, to be special, to be the guy that everyone wants to hang with. He's about to discover that "special" runs in his family. It's called lycanthropy.

Released in 1985, Teen Wolf shares many elements with I Was a Teenage Werewolf (1957, starring Michael Landon), and helped to revive the popularity of the werewolf in pop culture. It was followed by an animated series, the Distaff Counterpart Teen Witch, and a sequel, Teen Wolf Too, starring Jason Bateman as Scott's cousin Todd (who is also a werewolf). Teen Wolf, an In Name Only revival that was decidedly both Darker and Edgier and Hotter and Sexier, aired on MTV for six seasons from 2011 to 2017.