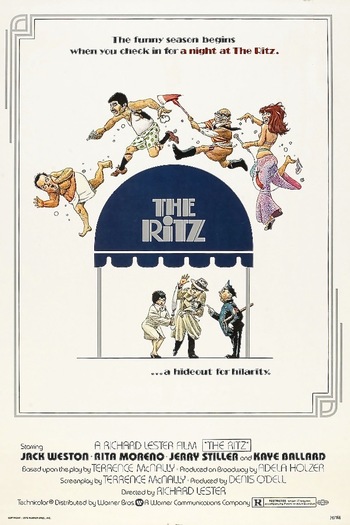 The Ritz is a 1975 play by Terrence McNally. It's a Farce in the Georges Feydeau tradition, but with the novelty of being set in New York City not long after the Stonewall Riots.

Gaetano Proclo, a middle-aged Mafioso with a wife and kids, has a hit put out on him by his brother-in-law Carmine Vespucci. Gaetano asks a cab driver to take him to the last place on Earth where anyone would look for a mobster, and the driver drops him off at The Ritz, which Gaetano thinks is a health club, but is actually a large, lavish gay bathhouse.

Once inside, the portly Gaetano fights off the advances of a Chubby Chaser named Claude, then befriends a Camp Gay frequent Ritz patron named Chris. Meanwhile, Carmine has sent a Private Investigator to the Ritz to track Gaetano down, but instead of the one he hired, the agency dispatches dim-witted, squeaky-voiced Michael Brick out for the job. Then everyone gets mixed up in the antics of Googie Gomez, the (straight) woman who serves as the featured singer in the club's floor show. Googie, who thinks she's destined for Broadway stardom despite minimal talent, mistakes Gaetano for a famous producer.

The original Broadway production ran for over a year, with Rita Moreno winning a Tony Award as Googie. The 1976 film adaptation, directed by Richard Lester and with a screenplay by McNally, features much of the Broadway cast including Moreno, Jack Weston, Jerry Stiller, and F. Murray Abraham.