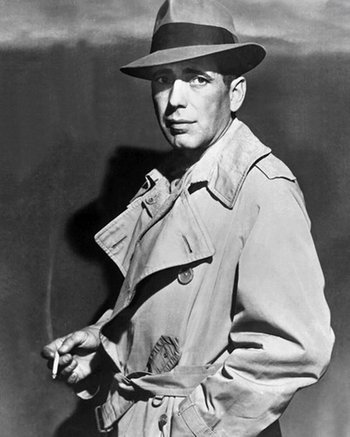 The stuff that dreams are made of
"Here's looking at you, kid."
— One of his many famous lines from Casablanca
Advertisement:

Humphrey DeForest Bogart (December 25, 1899 – January 14, 1957) was an American actor whose performances in 1940s films noirs earned him status as a cultural icon.

Bogart was born to Belmont DeForest Bogart, a New York society doctor of Knickerbocker descent, and his wife, society illustrator Maud Humphrey. After being kicked out of Andover Academy (one of the most prestigious schools in New England), Humphrey did a stint in the Navy as a military policeman near the end of World War One.

He drifted into acting in the early 1920s and became a regular in Broadway productions, often playing society fops. The 1929 stock market crash forced many Broadway theatres to close, but the real impetus behind Bogart's move to Hollywood and movies was the crash's effect on his family's finances; his father had been bankrupted, leaving Bogart's mother and disabled sister almost destitute and Bogart himself without a safety net. After spending much of the 1930s as a minor contract player on the Warner Brothers lot, his first great success was as the ferocious Duke Mantee in The Petrified Forest, which led to a period of typecasting as a gangster in B-movies. His breakthrough came in 1941 with High Sierra and The Maltese Falcon. The next year, his performance as Rick Blaine in Casablanca raised him to the peak of his profession and at the same time, cemented his trademark film persona, that of the hard-boiled cynic who ultimately shows his noble side. Other successes followed, including To Have And Have Not, The Big Sleep, Dark Passage, and Key Largo, with his wife Lauren Bacall (whom he married on friend Peter Lorre's advice); The Treasure of the Sierra Madre; The African Queen, opposite Katharine Hepburn, for which he won his only Academy Award; Sabrina, and The Caine Mutiny. During a film career of almost thirty years, he appeared in 75 feature films.

Despite being, arguably, not mainstream Hollywood and showing disdain for the general 'Movie star attitude' (he hated phonies), Bogart, in his capacity as a leading man and even a bit before that, got to work with many of the major female stars of the period, including Katharine Hepburn, Bette Davis, Ingrid Bergman, Ava Gardner, Audrey Hepburn, etc. He was also pretty connected to many of the major male stars through the Rat Pack and his funeral was a veritable "Who's who" of Hollywood.

At the time of his death from cancer in 1957, Bogart was one of the most respected figures in American cinema. Since his death, his persona and film performances have been considered as having a lasting impact and have led to him being described as a cultural icon. In 1997, Entertainment Weekly magazine named him the number one movie legend of all time. In 1999, the American Film Institute ranked him the Greatest Male Star of All Time. He made one movie with AFI's number one on their female list, Katharine Hepburn; offscreen, the two were part of the same social circle and were also close friends.

The term "Bogart," used to mean "hoard" (as in, "stop Bogarting that joint, give it to me") comes from how Bogart's characters would often be seen holding lit cigarettes, but would rarely actually take a puff.

He also makes appearances in several Looney Tunes shorts, including one where Elmer Fudd hits him in the face with a coconut custard pie with whipped cream.

Tropes relating to Bogart's work and cultural appearance include: