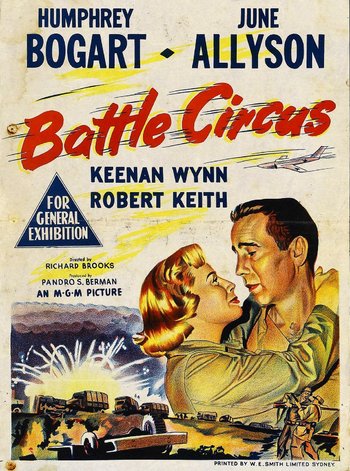 Battle Circus is a 1953 war picture directed by Richard Brooks and starring Humphrey Bogart and June Allyson. The film chronicles the work of the 8666th Mobile Army Surgical Hospital (MASH) as they treat wounded soldiers during The Korean War. The film is notable for being a more dramatic forerunner to the M*A*S*H franchise. Comparisons between the two are inevitable.

Lieutenant Ruth McCara (Allyson) is newly assigned to the 8666th (often shortened to 66th in dialogue) MASH, officially commanded by Lieutenant Colonel Hilary Whalters (Robert Keith), but effectly controlled by the Chief Surgeon, Major Jed Webbe (Bogart). The womanizing Webbe is quickly drawn to McCara, who constantly rebuffs his advances. Initially a poor addition to camp, McCara soon proves herself in the operating room, only increasing Webbe's interest in her. All the while, the camp must deal with a constant flow of wounded, enemy fire, supply shortages, and regular moves as the front line shifts.

This work contains example of the following tropes: