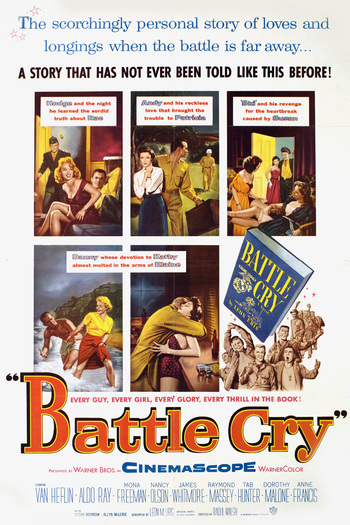 Battle Cry is a 1955 film produced and directed by Raoul Walsh, based on the novel of the same name by former U.S. Marine Leon Uris, who also wrote the screenplay.

The film is a drama set in World War II, following a group of United States Marines from boot camp to combat as members of the Communications Platoon, 6th Marines, 2d Marine Division. It depicts the forming of comradeships and the relentless training that the battalion, led by Major "High Pockets" Huxley (Van Heflin), has to undergo. In the battles of Guadalcanal and Tarawa, the battalion is employed only for mop-up duties, but after an out-of-line argument between Huxley and the commanding general (Raymond Massey), they are used as lead battalion in the Battle of Saipan.

Besides describing the battalion's everyday activities, the movie also details the private lives of some of the Marines. On military "R and R" in New Zealand, Andy Hookens (Aldo Ray) falls in love with Pat Rogers (Nancy Olson), the widow of a New Zealand soldier killed at El Alamein; while, during training, Danny Forrester (Tab Hunter) is torn between his sweetheart Kathy (Mona Freeman) and his affair with an older woman, USO manager Mrs. Yarborough (Dorothy Malone).