Film / The Battle of Midway 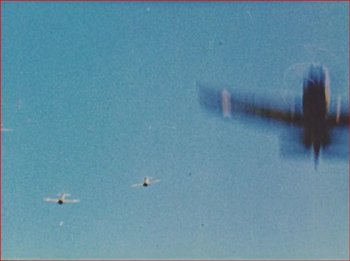 Lower left: bomb falling from a Japanese plane
"Midway Island. Not much land right enough, but it's our outpost. Your front yard."
Advertisement:

The Battle of Midway is a 1942 short film (18 minutes) directed and partially shot by an uncredited John Ford.

Despite being 47 years old at the time of Pearl Harbor, Ford was inducted into the US Navy and given the rank of commander. He was made head of the photographic unit for the Office of Strategic Services. In the middle of 1942 Ford was sent out to Midway atoll, consisting of two small islands in the central Pacific that were in use as a Navy base, one of the United States's most forward bases in the Pacific theater after the capture of Wake Island by the Japanese.

Ford arrived at Midway under the impression that he was supposed to film a Day in the Life of sailors at a lonely Pacific outpost. At the beginning of June he was told something different: that the Japanese were advancing towards Midway, and an attack was imminent. On June 4, 1942, Ford and an assistant cameraman went to the roof of the power station at Midway and took live footage of the Japanese bombing raid on the island. The dramatic shots include a Japanese Zero spiraling into the ocean and a giant plume of smoke billowing up from the Midway airplane hanger after it was completely destroyed by a Japanese bomb. Another cameraman took footage of planes from an American aircraft carrier, the USS Hornet, taking off to attack the Japanese.note Unfortunately Ford missed the chance at even more dramatic footage by not having a cameraman aboard the USS Yorktown, which was bombed and eventually sunk by the Japanese.

Ford suffered a superficial shrapnel wound on his arm which got him a Purple Heart. The short won one of the first Oscars for "Best Documentary", the distinction between documentary features and documentary shorts not being made until later. note Although nothing in the documentary mentions it, the pilots lounging about on the Hornet were mostly from Torpedo Squadron 8. Their flight wing attacked the Japanese without fighter escort and every single plane was shot down, with only one survivor from thirty officers and gunners.