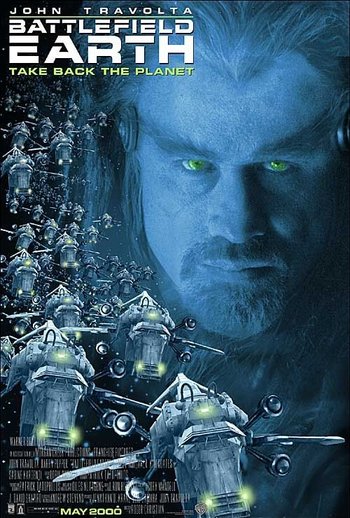 On May 12, we fight back.
"While you were still learning how to spell your name, I was being trained to conquer galaxies!"
— Terl
Advertisement:

The film version of L. Ron Hubbard's Science Fiction novel Battlefield Earth was released in 2000, directed by Roger Christian and starring John Travolta as Psychlo leader Terl (he originally wanted to play the part of the book's hero, Jonnie "Goodboy" Tyler, but that role eventually went to Barry Pepper because Travolta was too old by then).

Travolta, a self-proclaimed Hubbard fan (and Scientologist), wanted to do the film for a long time, but had trouble securing money for it because of studios' apprehension to bankroll the film due to its connections with the real-life Church of Scientology. He later poured millions of dollars of his own money into the project and signed on as a co-producer, and the rest ... well, is history.

After Metro-Goldwyn-Mayer and 20th Century Fox declined offers to distribute the film, it was eventually picked up by Franchise Pictures, a company known for helping stars rescue their troubled pet projects.

The film covers the first third of the Doorstopper book: the Psychlos come to Earth, beat the humans in about nine minutes, and establish an outpost here. They are here for gold — the rarest and most valuable substance in the universe, it seems. Jonnie leads a band of slaves to rise up against their masters. Travolta is still intent

on having the second half of the book produced.

While you were still learning how to SPELL YOUR NAME, Battlefield Earth was being trained to provide these trope examples!