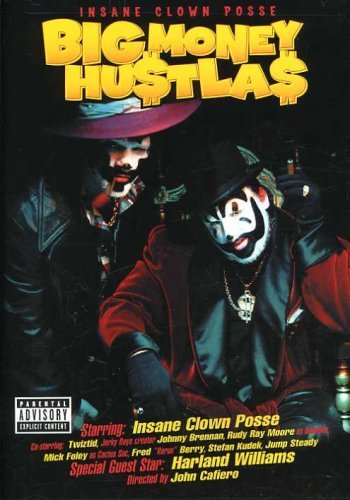 A 2000 comedy-action film and parody of '70s cop movies and exploitation flicks, Big Money Hustlas was written by, produced by, and starred the Insane Clown Posse. To fans of the group, the movie is a hilarious cult classic. To detractors, the movie is, well...you can probably guess what detractors think.

Set in New York, the movie stars Violent J (real name Joe Bruce) as Big Baby Sweets, a ruthless crime lord who has bought out the entire police force and rules the city with an iron fist, and his ICP partner Shaggy 2 Dope (real name Joey Utsler) as Sugar Bearnote Dah dah dah dah DUN!, a streetwise loose cannon cop from San Francisco who speaks in rhyme and arrives in town intent on bringing Sweets to justice. The duo wear their trademark clown makeup throughout the entirety of the film, a fact which is never commented on by anyone.

To call the film campy would be like calling the surface of the sun a teeny bit warm. Written by Bruce in only a month, fueled by a less than shoestring budget, and plagued by conflict with the crew, who both hated the film and objected to their pay scale, the flick powers through its various shortcomings fueled mostly by the ballsy irreverence of its humor and the gloriously hammy performances of its cast.

The movie is a cult classic amongst ICP fans, who love it for its ridiculous humor and shameless camp value. Few of the rap group's many detractors bother to watch the film, and those few who do are less likely to appreciate it. A western themed follow-up titled Big Money Rustlas was released in 2010.

"Don't mess with my mothafuckin' trooooooooopes!":