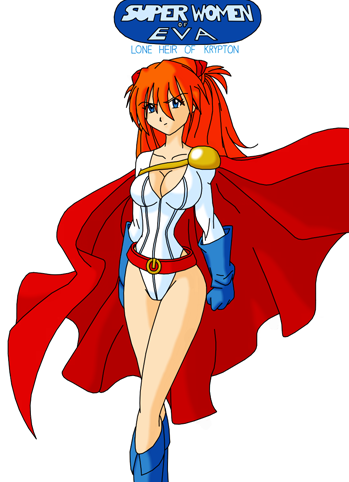 Having been conceived by donor sperm, Asuka never knew who her biological father was, but she assumed he was someone extraordinary. She had no idea how right she was, but she's going to find out.
Advertisement:

Shortly before arriving on Tokyo-3, Asuka discovers her body is developing weird abilities: she has great strength, great speed, is all but invulnerable, has different kinds of vision...

Initially the popularity of the super-women of Tokyo-3 bothers her and drives her to create a super-heroine identity and earn extra praise. However, things do not go as planned: her vast powers are a huge burden and a great responsibility; she earns praise and admiration but it feels hollow and undeserved, and she hates getting something without working for it; and she realizes many people -including her donor sperm- had great expectatives upon her. And it feels as if she is letting them down. It feels as if she needs maturing further and becoming a different, better kind of heroine...

by Mike313 is a Superwomen of Eva story that casts everyone's favorite boastful and brash Fiery Redhead, Asuka Langley Soryu, as the Flying Brick Power Girl and later Supergirl. The story follows Asuka from her first discovery of her powers, her pitched battles against supervillains, and beyond... as she deals with her growing attraction towards Shinji Ikari.

Compare with Last Child of Krypton, another story where an Eva character gains Superman powers, and with Children of an Elder God and Thousand Shinji (darker takes on the concept of Evangelion characters gaining powers).

open/close all folders
A-C
D-F
Advertisement:
G-I
J-L
M-O
P-R
S-U
V-Z
Asuka:"You know, I tried to live my whole life being the best at everything and never showing weakness to anybody, [...] I thought nobody would ever give a damn about me if I wasn't always top dog."
Shinji:"Asuka—"
Asuka:"Then I became Power Girl and Supergirl after that. I enjoy being a superwoman a lot; it's great to be able to help people. But at some point I realized that everyone expected me to be this…moral paragon. In fact, everybody thought I just naturally was one, and if I ever showed them otherwise, tons of people would be disappointed. [...] I was trying to be perfect all the time, and it was exhausting, [...] Even without the Fifteenth Angel, I think it might have eventually shattered me. Just driven me crazy or something."
Shinji:...
Asuka:"I picked being Supergirl over being an EVA pilot, [...] I'm sorry that I'll probably never use Unit Two again, but I'm glad that I finally made the decision, and I can definitely accept it. But the part where I have to constantly be this perfect symbol of justice and morality… I don't want to disappoint any of the people who look up to Supergirl, but that's a really tall order."
Shinji:"Of course, [...] It would be for anybody."
Asuka:"I think I can keep being the Supergirl that everybody believes in, the one that inspires people, but only if I have somebody I can show the real me to. Somebody I can talk to, and tell about the times when I was really tempted to do something cruel or selfish, without horrifying him, [...] You've seen the worst parts of me. You've seen me at my nastiest, and you've seen me as a broken mess. And you're still here, practically bending over backwards to help me through a rough time. Still caring about me. So, I'd like that person to be you, if you think you can stand it."