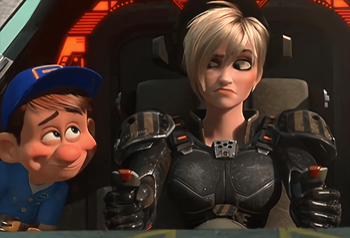 "You are one dynamite gal...please don't kill me!"
Advertisement:

So, you've got a protagonist who's a bit abrasive, a bit rough around the edges. If you wanted to make a love interest for that character (assuming the character is the type that has the human capacity for love), you could either make the love interest just like the protagonist, make them single, or Take a Third Option: you could make their love interest completely passive.

The inversion of All Girls Want Bad Boys and All Amazons Want Hercules, Pitbull Dates Puppy is when someone who's tough and Not Good with People enters a relationship with The Woobie, Non-Action Guy, The Heart, or the Extreme Doormat — often by force, though it is possible for one or the other to naturally fall in love with each other.

Often done in historical romance novels where a badass decides to marry some fresh young innocent thing as a change from his usual Vamp or Femme Fatale choices. May be a Romantic False Lead if done deliberately to screw with a more suitable ex.

Contrast Best Her to Bed Her. Also see True Love Is Exceptional for when a similar Opposites Attract dynamic actually works out, and Aggressive Submissive when the relationship works like this most of the time, until the time they actually have sex when suddenly their roles get inverted. Compare Beast and Beauty, Brooding Boy, Gentle Girl, Masculine–Feminine Gay Couple and Masculine Girl, Feminine Boy.

In psychology, this is known as the "precarious couple."

Has nothing to do with the rapper Pitbull.