You Didn't See That 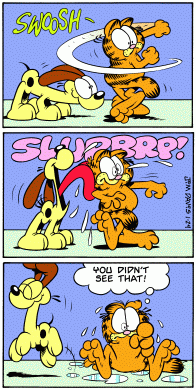 "You forget a thousand things every day. Make sure this is one of them."
— Michael De Santa, Grand Theft Auto V
Advertisement:

While Bob and Alice are going about their business, something happens that reveals a (possibly embarassing) fact about Bob he would rather have kept for himself.

Can lead to Let Us Never Speak of This Again. In some cases, Bob may try to resort to Laser-Guided Amnesia to make sure Alice forgets what she saw.

Sometimes, authors will have this reaction about a work they have backlash against, and then there are those things we all have never seen. This trope is not limited to sight, but can also be invoked for the other senses. Though sight and hearing are the most common examples, for obvious reasons. There are also many non-romantic or embarrassing examples.

See also Implausible Deniability. Compare I Was Never Here, when Alice specifically seeks out does not seek out Bob and I'll Pretend I Didn't Hear That.

May be connected to You Can See That, Right?.