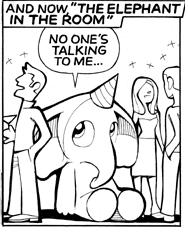 Being a Literal Metaphor for this is no fun at all.
Advertisement:

Don't bother looking at these tropes...they're not all that important.

Isn't there something better to do?
What, expecting a witty stinger or something? There's nothing to see here. Scram!