Recap / Red Dwarf Season I Me 2 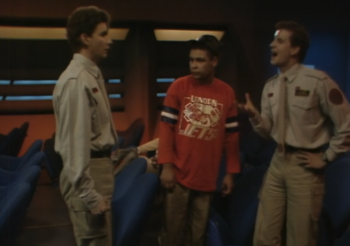 Lister looks as ecstatic as you'd expect with the idea of Rimmer in stereo.

At the end of the last episode, Lister — with the help of his Confidence made manifest — figures out where Rimmer is hiding the holodisks and attempts to swap Rimmer with a hologram of his adored Kristine Kochanski... only to discover that Rimmer has already replaced the disk in her envelope with a duplicate of his own.

The two Rimmers proceed to be utterly insufferable, spouting their usual catchphrases, fussiness, zealous devotion to promotion, and unwarranted arrogance. Lister enjoys having the whole quarters to himself when they move to the empty room next door. Despite every initial appearance of domestic bliss, however, Rimmer proves himself to be his own worst enemy... as usual.

The actual title of the episode, as it appears onscreen and is listed on DVDs etc, is specifically "Me2".