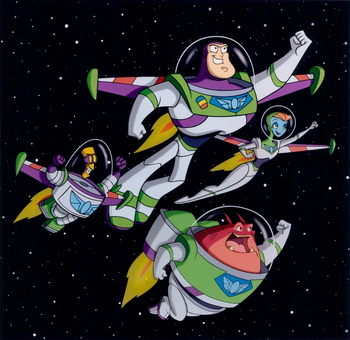 To infinity and beyond!

Buzz Lightyear of Star Command was a 2000-2001 animated television show from Disney television animation as part of ABC's One Saturday Morning block and UPN's sibling block, One Too, based on the character Buzz Lightyear from the Toy Story franchise. The Buzz in this show is not a toy, but the actual Space Ranger - remember how Toy Story alluded to a Show Within a Show that pre-dated the toy line? ("The world's greatest superhero, now the world's greatest toy!") This show is what that show might have looked like.

The story chronicles the adventures of Buzz Lightyear (Patrick Warburton), an agent of the galactic peacekeeping force Star Command, who frequently battles the Evil Emperor Zurg (Wayne Knight) and other threats to the galaxy. Buzz is accompanied in his missions by his partners on Team Lightyear: Mira Nova (Nicole Sullivan), the blue-skinned, ass-kicking princess of Tangea; Booster (Stephen Furst), the trademark big lovable lug; and XR (Larry Miller/Neil Flynn), the wisecracking, fast-talking Robot Buddy.

Not to be confused with Lightyear, an upcoming prequel film that will explore the origins of Buzz as a space ranger. The movie is supposed to tell the story of the real Buzz Lightyear who inspired the cartoon and toy In-Universe, so it may or may not erase the events of this series.

Ty Parsec got bitten by NOS-4-A2, a robotic energy vampire, and affected by the radiation of Canis Lunis's moon, turning into Wirewolf as a result.

Ty Parsec got bitten by NOS-4-A2, a robotic energy vampire, and affected by the radiation of Canis Lunis's moon, turning into Wirewolf as a result.