Cat Up a Tree 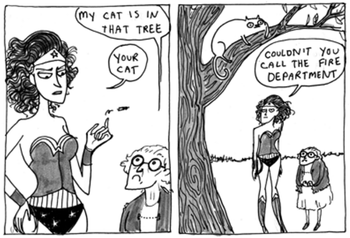 This trope is often used to give an opportunity for the Anti-Hero to Pet the Dog, especially if the character is a Kindhearted Cat Lover, but it can also be a sign of Chronic Hero Syndrome.

Other times it is used to illustrate that the story takes place in such a peaceful lovely town where this kind of thing is the biggest emergency anyone can think of. In this latter case usually firemen come to help the old lady.

Common variation of this trope is that the cat really dislikes whoever's coming to rescue it and goes all Tasmanian Devil on the rescuer in a whirl of claws and enraged meow-shrieking.

This is Truth in Television, if not as common as media would have you think. While cats are typically ground-dwellers, they have some rather impressive arboreal tendencies, and will regularly climb up tall objects to get a better vantage point - indoors or outdoors - and trees are no exception to the things they'll climb. The main issue cats face getting down from trees are that they can't climb down headfirst (in contrast to other arboreal creatures like squirrels or monkeys), and the stress from having to climb down without being able to see where they're going tends to scare them into staying put.

By the way, if your cat does go up a tree (or on a roof), call a tree service or your local animal control department/shelter/what have you. The fire department has better things to do. Like, you know, putting out fires. If you do call these agencies, and the cat is not in any danger or a danger to others, they'll tell you to leave it — it got up there, and it will find its way down when it gets hungry. A very common question asked by responders to these situations is: "How many times have you seen a cat skeleton in a tree?"

Nothing like the ol' fail-and-sail to start your day.

Nothing like the ol' fail-and-sail to start your day.