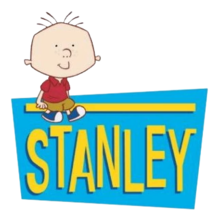 Stanley (2001-2004) was a show about a six-year-old first-grader who loves animals. His pets are a goldfish named Dennis, a cat named Elsie, and a dog named Harry. He also has an older brother named Lionel and many adventures also involved his friends/classmates from school. He would use his Great Big Book of Everything to learn about the animals, or occasionally the Internet.

The show was seen for several years as part of the lineup of the Playhouse Disney block on Disney Channel and later the 24/7 Disney Junior network, but it eventually got pulled off that schedule, too.