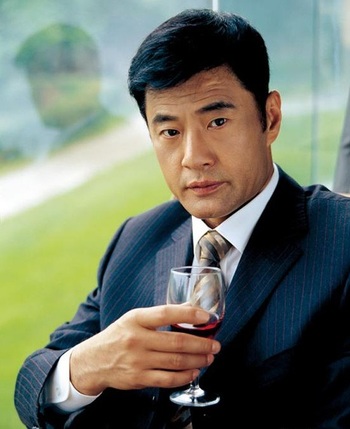 The only man who can look so stylish after getting his ass handed back to him by Michelle Yeoh, Jackie Chan, Donnie Yen AND Jet Li.
Advertisement:

Trained in the Peking Opera School since age 11, Yu has been fascinated in stunts, action, and kung-fu, inspired by watching Jet Li's debut film, The Shaolin Temple at a young age.

Yu made his film debut in Holy Robe of the Shaolin Temple as the Big Bad of the movie, where he gets noticed by Hong Kong directors, such as Yuen Woo-ping, Tsui Siu-ming, Tsui Hark and the like, who would frequently employ Yu as the go-to villainous henchman in their action movies, but after Yu landed the titular role of Iron Monkey he became somewhat of a minor cult-classic among Hong Kong martial art film aficionados. With a career spanning over 50 films, ranging from Wuxia to Heroic Bloodshed to comedy and gritty drama, Yu would antagonize Jackie Chan, Donnie Yen, Jet Li, Sammo Hung, Michelle Yeoh and other superstars, with him most of the time being on the losing side of the eventual battle.

Yu gained some popularity in his native China when he returns to star in local TV series, most remarkably as the Three Kingdoms Era general Guan Yu in the 2010 version of Three Kingdoms.