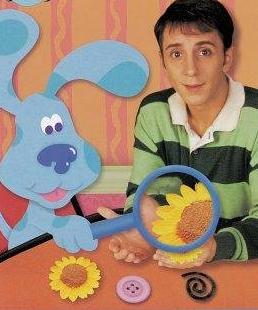 We gotta find another pawprint,
That's the second clue!
We put it in our notebook—
'Cause they're whose clues?
Blue's Clues!
Advertisement:

Blue's Clues is a long-running children's television show, produced by Nickelodeon as part of their Nick Jr. preschool block. If you grew up in the United States, the UK, Portugal, or South Korea during the 1990s or early 2000s, the odds are good that this show will be familiar to you (under different hosts and names respectively).

Set in a vibrant, candy-colored world of animated characters combined with a human host, the show features the escapades of Blue, a blue-colored dog (voiced by Traci Paige Johnson, one of the show's creators). Once an Episode, Blue will want to do something—be it read a book, have a snack, or make some kind of craft. However, as Blue seems to be the only creature in her world who can't talk, the only way she can communicate with her human owner is by playing Blue's Clues- a game in which she will imprint 3 objects around the house (or backyard) with her blue pawprint, labeling them a "clue." Once performed, it's up to her owner—along with the kids watching from home—to figure out what she wants to do by piecing together these clues.

Introduced in 1996, the show is notable for pioneering the kid's show version of an Interactive Narrator—one who talks "to" the camera, seemingly at the children watching. Blue's Clues was so successful, this went on to become the norm for most kid's show hosts today— especially those directed at the "Under 6" age bracket. It also originally ran under the notion that children learn through repetition—so the same episode of the show would run for a full week. (The show later dropped this practice.) It was hugely successful, leading to several direct-to-video movies, a live show adaptation, an eventual Spin-Off called Blue's Room, and, of course, heaps and heaps of merchandise.

The show was originally hosted by Steven Burns as "Steve", but he left the show after six years. note A large number of rumors swirled about the reasons why, from death hoaxes to drug overdoses. The truth was a number of the show's original production staff had left, and he felt ready to move on. In addition he was losing his hair and was afraid of going bald on a kids show and seeming too "old" to the kids - and he has been successful in indie rock circles thanks to his connections with his friends, the Flaming Lips. His replacement was "Joe" (Donovan Patton), his in-universe younger brother, who ran the show, and its spinoff Blue's Room, until 2007, when production came to a halt. Reruns aired on the Nick Jr. channel until July 2019 (4 months before the reboot premiered), and DVDs still exist. Running from 1996 to 2006 (or 2007 if you count Blue's Room), Blue's Clues was Nick Jr.'s longest-running series, up until Dora the Explorer broke that record in 2010.

On March 6, 2018, it was announced that a reboot using CGI animation was in production. On September 13, 2018, the reboot was revealed

to be titled Blue's Clues & You!, with actor Joshua Dela Cruz as the new host, "Josh". On August 26, 2019, a November 11 premiere was announced, and it was stated that the show would be a continuation of the original series.

Compare to Llan-ar-goll-en, another Preschool Show about a live-action man and his animated female doggy sidekick finding clues (or in this case, solving mysteries).

'Cuz they're whose tropes? Blue's tropes!

Now it's time for so long!
But we'll sing just one more song!
Thanks for doing your part!
You sure are smart!
You know with me and you,
and my dog, Blue!
We can do anything!
That we want to do!

This Blues Clues episode is dedicated to Fred Rogers, who made us laugh.

This Blues Clues episode is dedicated to Fred Rogers, who made us laugh.