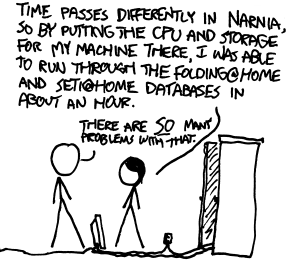 It would be so cool if it were possible...

Loki: The Bifrost brought me out here weeks ago.
Thor: Weeks ago? I just got here.
The Grandmaster: Time works real different around these parts. On any other world, I’d be like millions of years old. But here on Sakaar ...
— Thor: Ragnarok
Advertisement:

Travel between different universes can be a tricky thing. Sometimes, time passes more quickly in your home universe, so that when you return from a trip to another one, everyone you know is dead. Other times, you can spend weeks, months, or even years in another world and come back only a short time after you left.

Sometimes, however, the relative movement of time isn't that consistent. You might be able to re-enter your universe at any point you choose, effectively combining dimensional travel with Time Travel. Other times, the relative flow of time between the two universes is out of your control: you might return at the exact moment you left, hundreds of years in the past or future, or anywhere in between. And the next time you make the same trip, the results might be radically different. These time jumps could be random, or they might be revealed to serve some higher purpose or destiny.

This is Narnia Time, when the relative flow of time between two or more different universes changes to serve the needs of the plot.

May include or contrast with Year Inside, Hour Outside and Year Outside, Hour Inside. Can also cause Time-Travel Tense Trouble. See also Timey-Wimey Ball. Compare with San Dimas Time where time passing in the "home" universe is equal to that experienced by the time travelers.