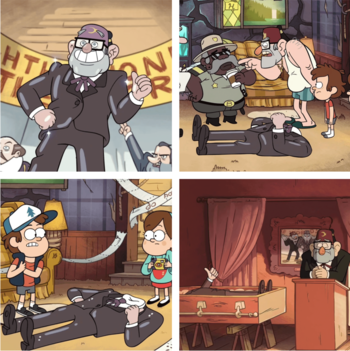 An entire murder investigation and funeral for a wax statue. Don't bother asking, it Makes Just as Much Sense in Context.
"Sounds like you had a pretty special and intimate relationship with this hammer and that losing it was almost comparable to losing a loved one."
— Korg, Thor: Ragnarok
Advertisement:

This is when an object (not a robot - that's its own trope - or Animate Inanimate Object) stops working, goes missing, or is destroyed or retired, and the characters treat it as though it has died. This can range from simply saying something like "Goodbye, friend", to giving it a whole funeral. Vehicles, toys, and the Companion Cube are commonly "mourned."

It can be Played for Laughs but also for drama, especially if the object has become a character in its own right, both in and out of universe. Compare with Sentimental Sacrifice.